Adrian Saravia was born in Hesdin, Artois, in the Spanish Netherlands early in 1531. His father was Christopher Saravia, a Spaniard, and his mother was Elizabeth Boulanger. Nothing is known of his early years, but when he reached manhood he became a Franciscan Friar in Hesdin. Later on he moved to St. Omer and became a member of the Cordelier Community. This move may have been caused by the fact that Charles V demolished Hesdin in 1553. According to his own account, he spent some time studying in Paris, but he does not say when he was there or what he was studying. However, we do know that by 1557 he had left the Franciscan Community and become a convert to the Reformation and the Calvinist cause. One can only speculate as to the reasons for his conversion. On the one hand there was the brutal suppression of parts of the Netherlands by the Spanish army, and on the other hand he would have had ample opportunity to discuss with Lutherans and Calvinists. Adrian’s youth had been spent in a part of Europe which had been a melting pot of religious and political ideas.

The tide of change was on the way in England. In November 1558 Mary Tudor died, and Richard Pole, the Roman Catholic Archbishop of Canterbury, died on the following day. Elizabeth I came to the throne and her coronation took place in January 1559. The Protestants in the Netherlands had been harshly treated and persecuted by Charles V and Philip II of Spain, and continued to be harshly treated by the Duchess of Parma and the Duke of Alva after Philip’s return to Spain in 1559. The Prince of Orange was the champion of the Protestant cause and Elizabeth secretly supported him, allowing Dutch ships to use English ports as bases for raids on Spanish controlled ports, but openly she was more concerned with the general balance of power.

Adrian Saravia had spent part of 1558 in Geneva, but in the early part of 1559 he travelled to England with many returning English exiles. By the summer of 1559 he had returned to the Netherlands and was living in Ghent. On the 22nd.June, 1561 he married Catherine d’Allez. Her father had been executed for being a heretic and her leanings were towards the Reformed Church. They immediately travelled to London where Adrian was appointed curate at the French Reform Church in Threadneedle Street. They also attended the Dutch Reform Church in Old Broad Street, which occupied part of the former Austin Friars Monastery. Edward VI granted the property to the Dutch Church in 1550 in the same way that he later granted the Grey Friars Monastery in Newgate Street to Christ’s Hospital School. Austin Friars became a focal point for the meeting of Dutch refugees in London and it is at this time that Adrian is described as ‘a studious young man, held in high esteem’.

By 1562 Adrian had left London for Antwerp where he became the minister of the Walloon Church. At the same time he was instrumental in founding the Walloon Church in Brussels. It was reported that he moved in high social and ecclesiastical circles. He worked hard to expand the Reformed Church in the Netherlands, and he published the Dutch Confession of Faith. These activities were considered very subversive by the occupying power and King Philip decided to suppress the Reformed Church. Adrian’s position was becoming increasingly intolerable and he was forced to leave. In September 1563 he became the first headmaster of Elizabeth College, Guernsey. This school had been founded by Royal Statute earlier that year. He was also appointed as Assistant Minister of St. Peter’s Church, Guernsey, which was a church adopting the Genevan discipline. In 1564 he found himself in sole charge of St.Peter’s Church because the minister, Nicholas Baudouin, was moved to Jersey. As a result of increasingly unsettled conditions in the Low Countries, Adrian’s parents came to join him in Guernsey. He had exceedingly poor opinions of the people of Guernsey and he conveyed these opinions to Sir William Cecil, the Queen’s Principal Secretary, in a letter of 1565.

He had come to admire England and the English so much that in September, 1566, he asked the Governor of Guernsey if he could become an English citizen. The Governor passed on this request to Sir William Cecil. Cecil’s reply made no mention of citizenship, but asked the Governor to pursuade Adrian to stay in Guernsey a little longer than he originally intended. Not deterred by this, another letter requesting citizenship was sent to Cecil in 1567, and on the 10th. February 1568 his wish was granted. Adrian had met Sir William Cecil briefly in 1566 to air his grievances about the school and the school building. Apparently, only ten of his pupils were islanders, the rest being from England, and no progress had been made on promised improvements to the building.

During 1566 Adrian had visited the Netherlands to attend the Synod of the Dutch Church in Antwerp and he saw its members approve the Confession of Faith. In the latter part of 1568 he left Guernsey and served as Chaplain to the army of the Prince of Orange. Whilst he was undertaking this task, he wrote some pamphlets which praised King Philip of Spain on the one hand and condemned the actions of the brutal Duke of Alva on the other hand, with the intention of trying to show that the Duke was not acting in accordance with the wishes of the King. This was quite a clever approach, but unfortunately it did not achieve the desired result.

In 1569, Adrian moved to Southampton with his entire household, which now included servants, and he may have taken a temporary educational post. In the following year, the year in which Pope Pius V excommunicated Queen Elizabeth, the Dutch Church of Austin Friars in London began sending artisan ministers to the North and West Netherlands. It was hoped that they would be able to spread Calvinist ideas whilst they were doing ordinary jobs and so remain undetected by the Spaniards. Adrian visited Flushing during the year to see how the scheme was progressing. 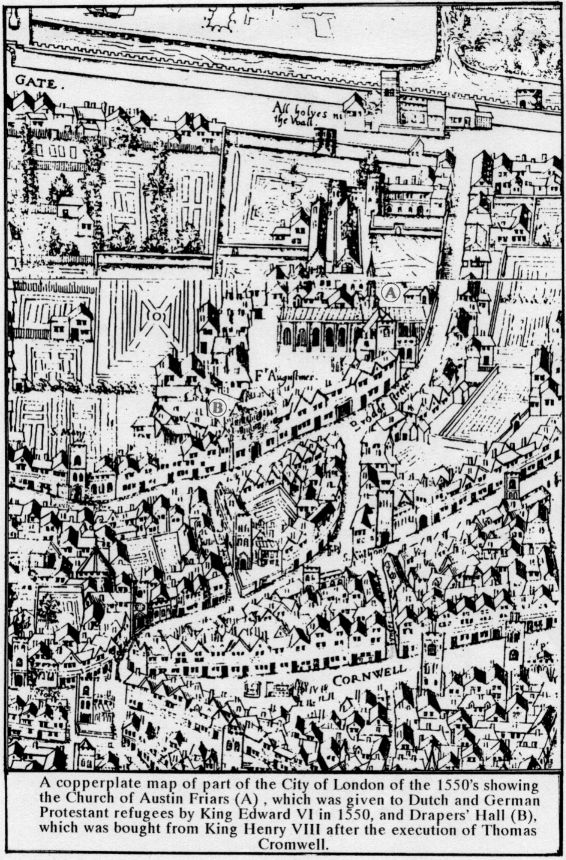 During 1572 he became Headmaster of King Edward VI School in Southampton and it is recorded that he taught Greek, Latin and French to children of noble birth. French was the language spoken in Adrian’s home and since the pupils ate meals with the family they soon became proficient in conversational French. As most of the pupils were destined for high places at court, or for diplomatic service, these languages would have been very useful for them. A number of prominent men were former pupils of his. It is not known what his salary was at this time, but he earned a little extra by letting accommodation to pupils.

At the same time as he took up his appointment in Southampton the protestants in the Netherlands came out in open revolt against Spain. The situation there was never far from his thoughts. In 1573, Prince William of Orange asked him to help raise money for refugees, and the church in Dordrecht twice asked him to go there as their minister. His father had died in the previous year, but he still had his elderly mother to consider. She died in the latter part of 1578 and in the same year Adrian resigned his headmastership. He felt that he was being pulled in two directions. He had been in constant touch with the Dutch Church in London and he was fully aware of the political, military and religious situation across the North Sea, yet those in England wanted him to stay and the Dutch communities were asking him to return.