In mediaeval times the chief crops were oats, barley, rye, millet, beans and peas. Animal husbandry was important. The corn was taken to Barton Mill, which was situated at the end of Mill Lane to the east of the railway line. The eastern end of Mill Lane is now occupied by the Argos warehouse site. Nowadays, oats and rye tend to be found in colder or wetter areas of Britain, whilst wheat is one of the principal cereals round here. Forty years ago there were at least four mediaeval strip fields all clearly visible. Most had been built on in the course of time, but one field to the north of the village, the Radhurst, or Raddahs (1839 Tithe Map), stood out proudly as a strip field left to permanent pasture until the late 1990’s when modern ploughing levelled it. A small section of strip field can still be seen if you leave Main Street by way of Bridlepath 24 . You will see it immediately on your left-hand side. 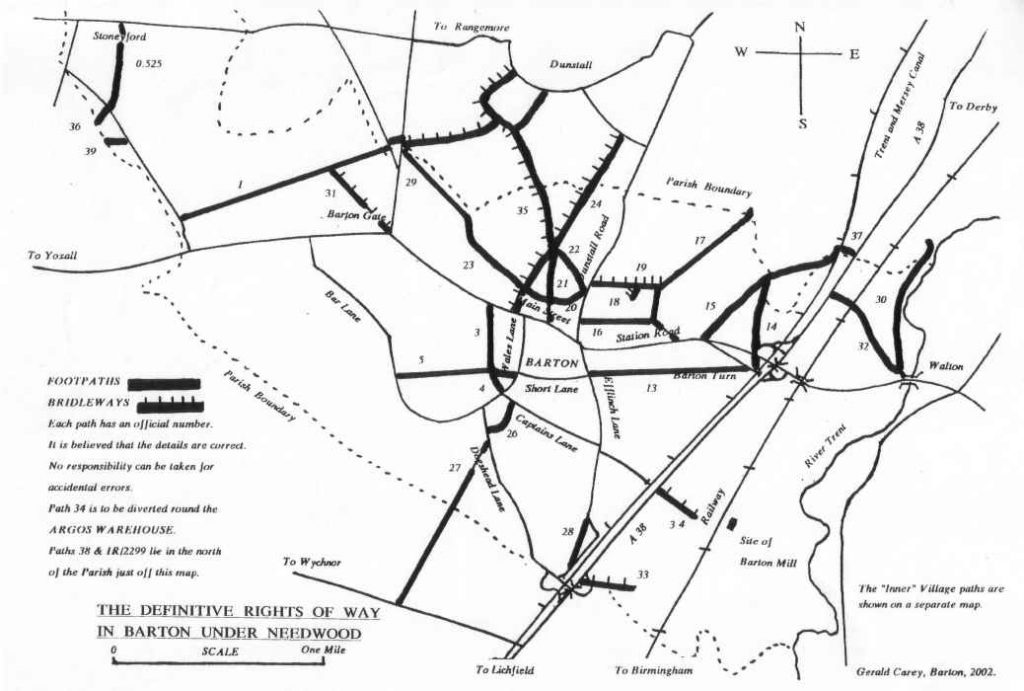 The flood plain of the Trent contains some of the most fertile soil in the Parish and, if it were not liable to flooding, the area would have been an important arable area. As things are it is almost completely given over to permanent pasture, and used for grazing cattle and sheep. Permanent pasture is also the predominant land use in the west of the Parish due to the heavier soils.
Some of the changes in the past forty years can be summarised as follows:

(a) Farms tend to be operating as larger, more economic, units.

(b) Farms are more highly mechanised and less labour intensive.

(c) Some hedges have been removed to enable more efficient use of machinery. However, this has involved loss of wildlife habitat.

(e) In addition to traditional cereal crops, the most noticeable changes have been the introduction of oil seed rape, and maize grown for cattle feed.

(f) Because of the pressures on farmers at the present time, there has been a tendency for some to diversify into other activities.

(g) Barton Park Farm, and the western part of the Dunstall Estate which lies in Barton Parish, are both currently undergoing a transition from arable and pastoral farming to afforestation.