It has already been pointed out that Walton was the first place south of Burton where the River Trent could be forded and as such it played an important part in military history. In 1322 King Edward II wanted to attack the Earl of Lancaster at Burton, but his army was unable cross Burton bridge because it was so well defended. So he brought the army south to Walton, crossed the river, and proceeded north along the west bank, intending to outflank the Earl’s men and take them by surprise. The Lancastrian army got wind of this and swiftly retreated to Tutbury and beyond, quickly pursued by the king.

In 1835 the first bridge was built at Walton, replacing the ford and the ferry. It was a toll bridge, the tolls being collected on the Walton side. The ford had been unpredictable, due to the varying heights of the river, and the ferry boat was small and often dangerous. The bridge was substantial, being constructed of stone, brick and iron, but it became unsafe after serious flooding in 1947. The foundations of the 1835 bridge can still be seen on both sides of the river today. As there was plenty of surplus military equipment after the war, a ” bailey ” bridge was erected. It was intended to be a temporary structure, but it lasted until 1974 when wear and tear made it necessary to replace it with another bridge of very similar design. Further repairs were carried out in March, 2000, and in August,2002 major engineering work was started for yet another new bridge.

The Ryknield Street route must have decayed when the Romans left and as long as people walked, or travelled on horseback, that did not matter too much, but with the later re-introduction of wheeled vehicles, a sound surface was needed. In the middle of the 16th.Century it was made compulsory for local parishes to maintain the roads. Things improved further with the introduction of Turnpike Roads and their ability to raise money by levying tolls, but it was to engineers like Telford ( 1757-1834 ) and Macadam ( 1756-1836 ) that we owe the proper surfacing of roads. Barton’s Turnpike Road became the A 38 in the course of time. This was an ordinary two-way traffic road in 1960 and the only stretch of that road still existing in its original state is that running along the east side of the canal at Barton Turn. The modernisation of the A 38 began with the by-passing of Lichfield in the late 1950’s, reaching Barton under Needwood and by-passing Barton Turn in 1961. The junction of Station Road with this new A 38 was highly dangerous and there were many fatal accidents. The authorities were slow to respond to pressure for improvements. Eventually, the decision was taken to build the present interchange and the ribbon was cut at the opening ceremony at precisely 11.05 a.m. on Tuesday, 22nd. November, 1977. I know this for absolute certainty because I was present at the time ! The interchange at Dogshead Bridge was approved by Mr.Peter Bottomley, Minister for Roads and Traffic, on the 21st.October, 1987, but it was not completed until the autumn of 1991. Regrettably, this involved demolishing Brindley’s canal bridge of 1777. I wonder if they had permission to do this, because it must have been a Grade 1 listed structure !

We have already seen how the A 38 was one of the reasons encouraging Barton to become a dormitory settlement, but it has also encouraged very heavy lorries to come through Barton as a short cut to the motorway network. This traffic is shaking the very buildings which make Barton so attractive. The fabric of Main Street and Station Road is being destroyed at this very moment. This is very evident when you look at the brickwork fronting onto the road. 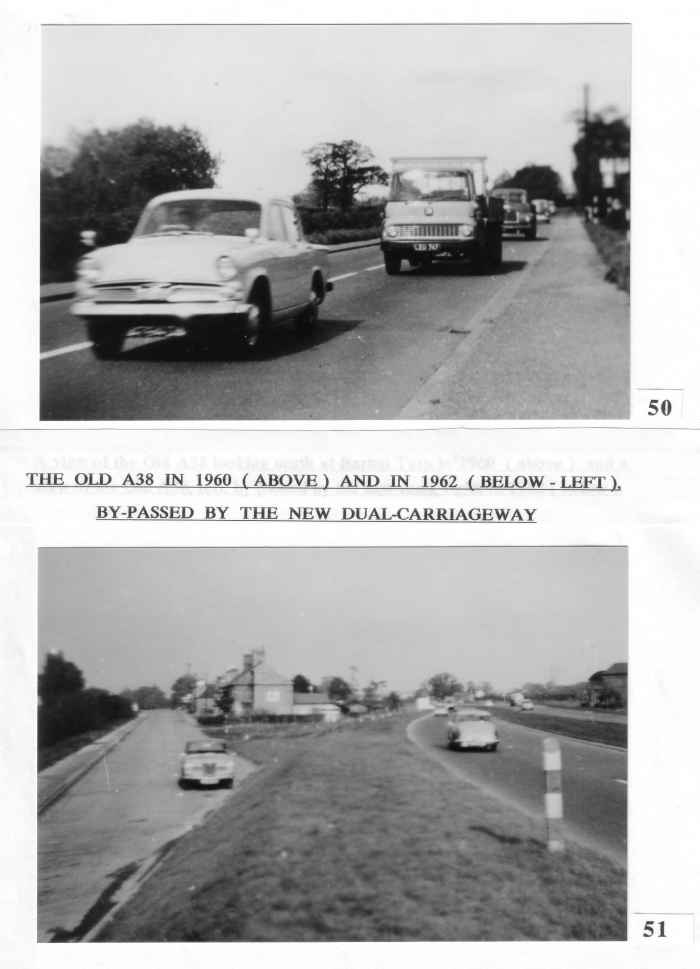 Over the years there has been much talk of a by-pass for Barton, but the reality is that this comes very low in a list of present day priorities. Nevertheless, recent enquiries with the County Council and the East Staffordshire Borough Council have revealed that the ” preferred ” by-pass route still on file is the same as it was in 1958, i.e. a route starting from a point just west of the junction of Barton Park Farm drive and Main Street, skirting the north side of the village, and linking up with Station Road to the east. This route would ruin some of the finest landscape in the Parish, and a southerly route should be seriously considered before other people decide for us.

ROAD NAMES PAST AND PRESENT

There have been many changes to road names in the past two hundred years.

Below are some examples :-

( The years shown in brackets indicate the dates of maps on which these road names appear ).

( This list does not pretend to be complete, but the principal changes are here ).

NOTE. When I first came to village the name BAR was spelt with one ‘R’, and so it was spelt on the old maps. This is logical since it refers to the bar, or Forest Gate ( Blakenhall Gate ), which was situated on Bar Lane.