The weather records for Barton have been kept over very many years by devoted individuals, notably the late Mr.P.H.Potter, and Mrs Van Daesdonk, and these records are printed in the Parish Magazine every month. Whilst these are very interesting in themselves, I am not aware of any long term statistical analysis having been made from them. I may be wrong about this, in which case I apologise. I have therefore resorted to using figures given in the Land Utilisation Survey of Staffordshire, Part 61,1945, ( written by J.Myers and edited by Prof.Dudley Stamp ). Whilst these figures are not recent, or specifically related to Barton, they are probably the best we are likely to get.

Rainfall figures for this part of Staffordshire recorded between 1881 and 1915 showed that the average annual rainfall amounted to 51 cm ( or 26.73 inches ) compared with about 32 cm. ( 15 inches ) in East Anglia. August was usually the single wettest month, whilst the wettest three consecutive months were October to December. February and April tended to have the lowest rainfall. Having said this, the summer half of the year usually had a slightly higher rainfall total that the winter half of the year.

The mean annual temperature for the County of Staffordshire between 1881 and 1915 was 9.7 degrees C. ( 49.5 degrees Fahrenheit ) at sea level. This figure can be reduced by 1 degree C. for every 166 m.. above sea level. The mean temperature for January of 3.8 degrees C. ( 39 degrees F. ) means that the temperature is similar to the north coast of Scotland. The whole of western Britain has slightly higher mean temperatures at this time due to the influence of the Gulf Stream. The July mean temperature in this area is 16 0 degrees C. ( 61 degrees F. ) and temperatures get lower as you go north. One interesting thing is that plant development tends to be about a week later in Staffordshire than at a place on the Welsh coast on the same latitude. Of course. actual rainfall and temperature figures can vary greatly in the long term. We will not know if there is any such thing as “global warming” until records have been kept for a very long time. We might just be experiencing a warmer cycle at the moment, but the long term could lead to another ice-age !

Mrs.H.J.Van Daesdonk, the present weather recorder for Barton under Needwood, says that the 1990’s had particularly low rainfall. She says that the weather seems to be more equable, or less extreme, than it was and that this is borne out by the lack of heavy snowfalls and the fewer opportunities for children to go sledging. Anecdotal evidence suggested that Drakelow Power Station had an effect on local weather, depending upon wind direction. Allotment holders have complained to her about the dryness of the soil. Could this be due to land drainage round the “lakes” and the rail depot, the increase in the built-up area of the village causing faster run-off and less seepage, or just low rainfall ? Mrs.Van Daesdonk says that that the southern end of Efflinch Lane is often colder than the middle of the village in winter. Barton’s location on the southern slope of the Needwood Upland seems to give it some protection from the elements. I have been told that the harvests on the higher ground to the west of the Parish are a few weeks later than those of the lower ground to the east.

It is reasonable to assume that Needwood Forest would originally have extended eastward to the limit of the heavy soils of the Keuper Marl.. The natural vegetation cover had already been cleared round the early settlement by the time of the Doomsday Book because it states that there was pasture and arable land at that time. In that event we can say that the natural vegetation of most of the Parish would have been much the same as that stated in an early description of Needwood Forest, i.e. trees such as holly, lime, sycamore, ash, hawthorn, oak and elm. Oak was by far the most important tree. The soils derived from Keuper Marl and Boulder Clay found on the higher ground were ideally suited to forest, and it provided excellent habitat for red deer and wild horned cattle. The accompanying photograph of a painting by Joseph Wright of Derby shows the type of vegetation he found in Needwood in 1790. 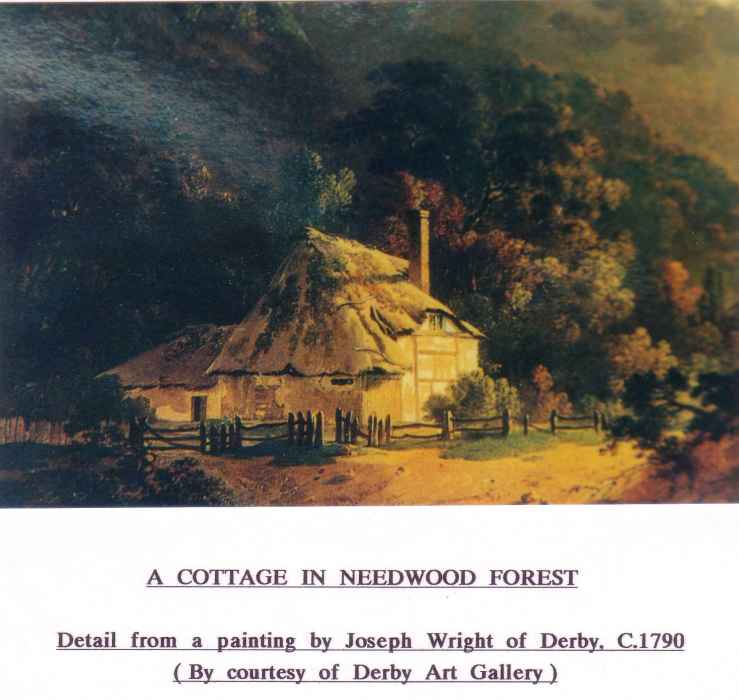