Relief And Drainage (and the effect of drainage on administrative Boundaries) 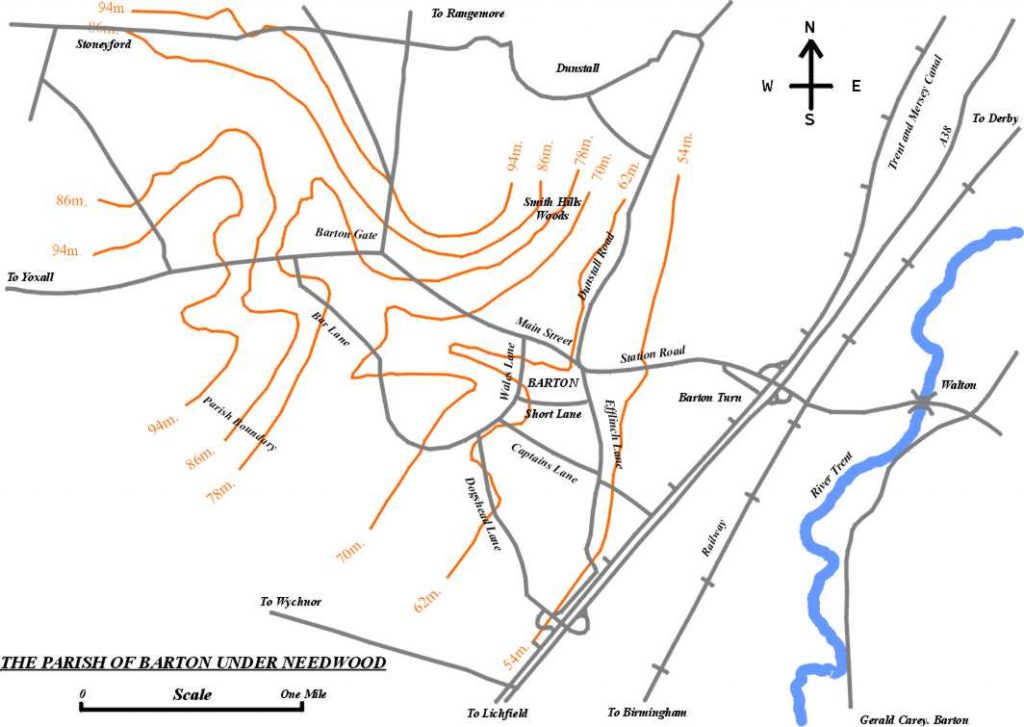 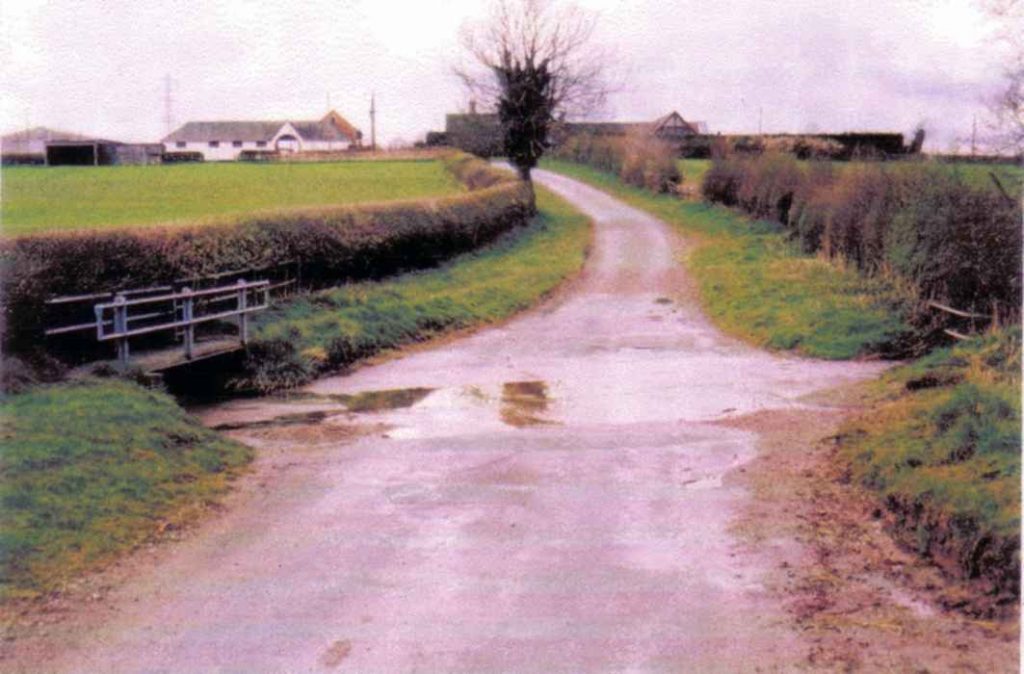 The village itself is situated on slightly rising ground, 54 m. to 70 m. ( 175 ft. to 225 ft. ), on the western side of the Trent and a little over 1.6 km. ( 1 mile ) from it. As the contour map shows, there is a shallow valley running from the north-west of the Parish towards the south-east and the Barton Brook occupies the eastern portion of this valley. The appreciation of landscape is a matter of opinion, but I would suggest that the most dramatic scenery in the Parish is just north of the village at Smith Hills. This is a vantage point giving fine views of the village to the south, and equally good views looking towards the neighbouring Parish of Dunstall to the north. It is to be hoped that the planners of the future will have the good sense never to allow building development in that area. 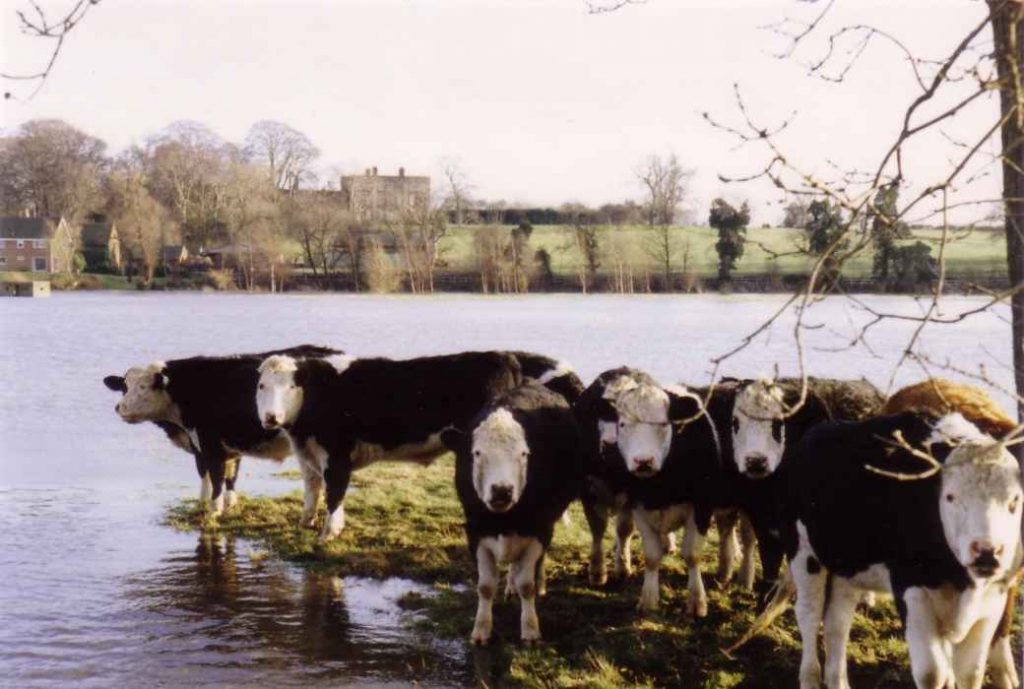 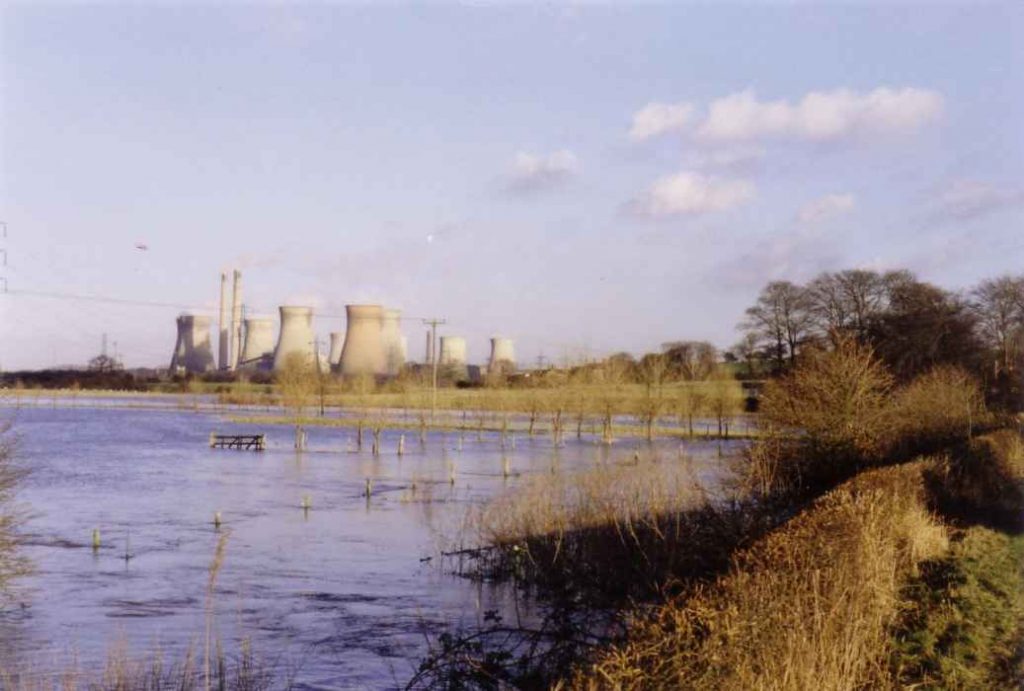 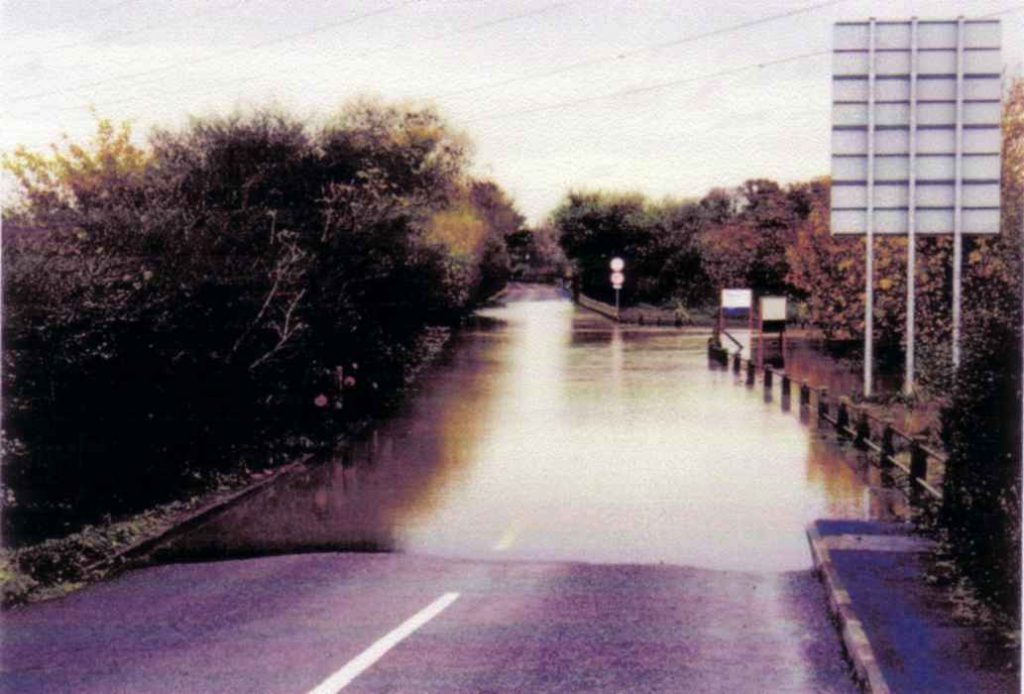 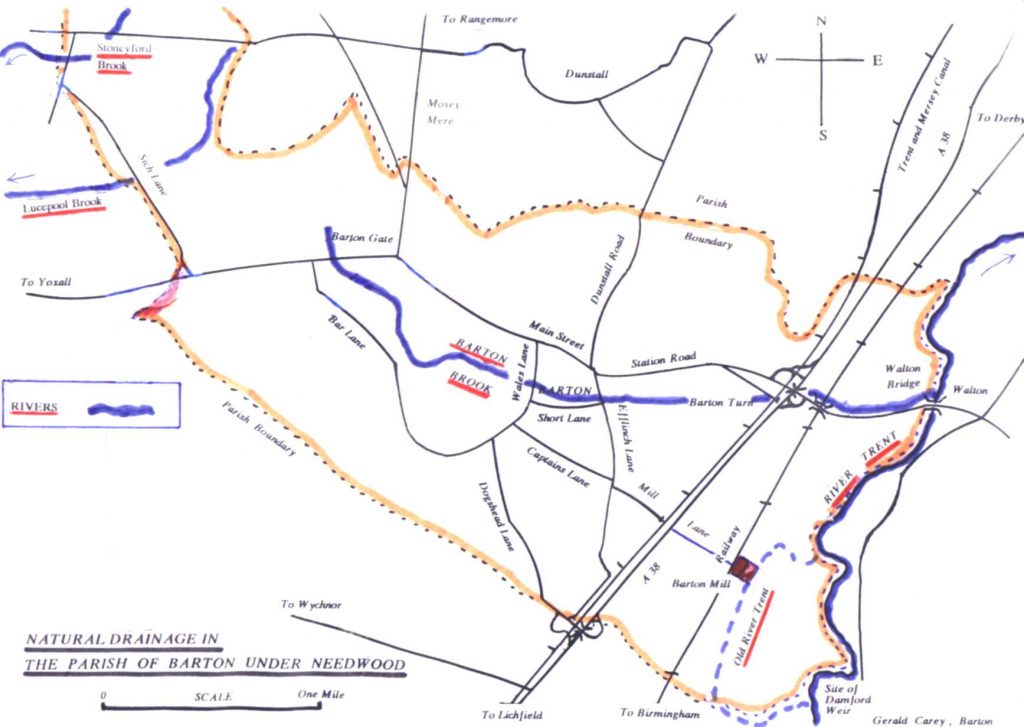 Barton Brook, a tributary of the Trent, rises just north of the Yoxall Road between Barton Gate and Bar Lane, and flows through Barton Park Farm before winding through the village, past the Fishpond and the Holland Sports Field, to join the Trent at Walton Bridge. 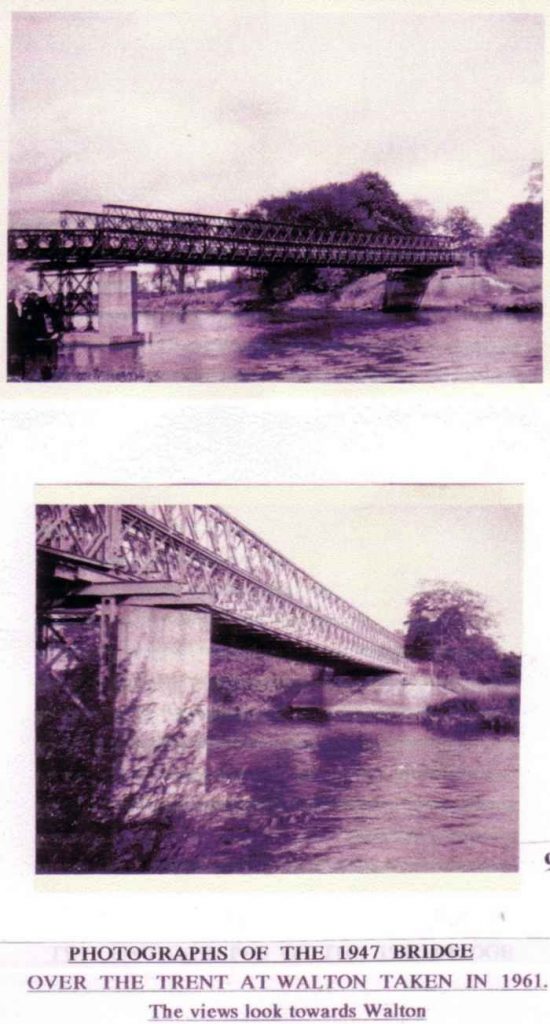 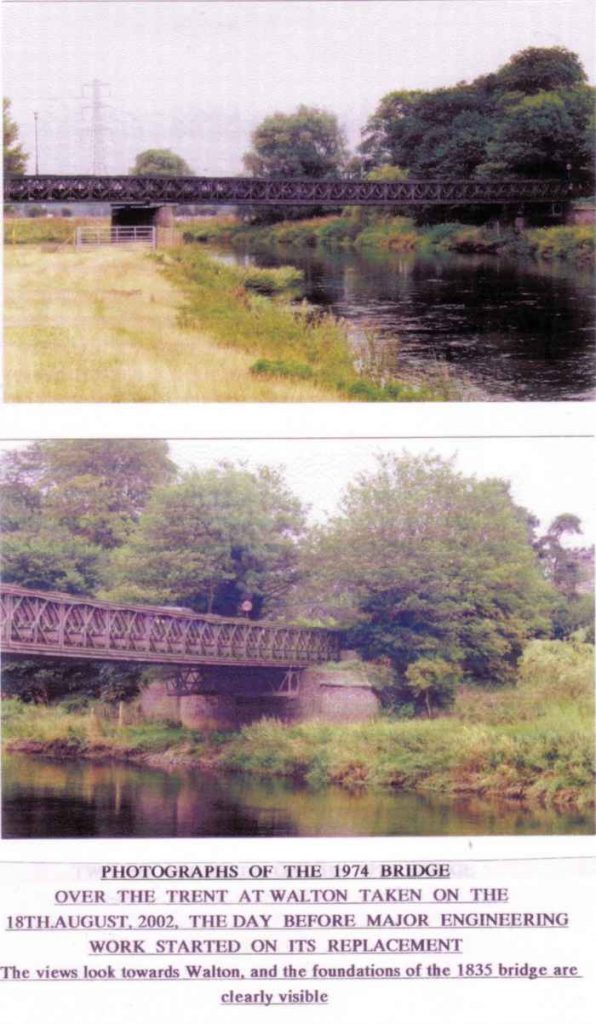 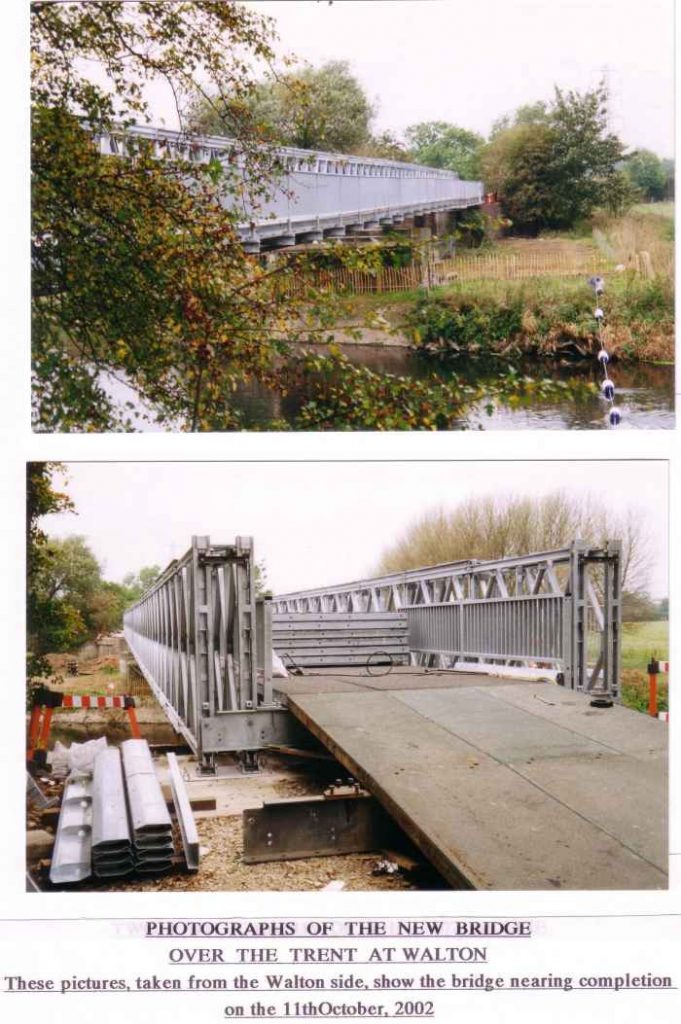 Two smaller streams cross the west of the Parish, the Lucepool Brook which flows across Sich Lane and Lucepool Lane, and Stoneyford Brook, or Lin Brook, both streams flowing off to the west to join the River Swarbourn in Yoxall Parish.

Any river flowing through a wide flood plain constantly alters its course. The River Trent is no exception. I was speaking to an Ordnance Survey surveyor near Walton Bridge some years ago and he told me that the particular stretch of the river he was surveying had shifted about six yards since the previous survey. This is an ongoing procedure as the outer edges of meanders are eroded by the faster running water. A long time ago the mainstream of the Trent followed a more westerly course providing power for Barton Mill . In the course of time the river carved a more easterly course for itself. The stretch of the river which fed the mill became known as the ” Old River Trent “, and when the mill found its water supply less and less reliable, a weir was constructed ( called Damford Weir on the 1839 Tithe Map ) and this kept the mill wheel turning until severe flooding, or decay, led to the weir’s destruction. In 1994 the River Trent dislodged sand and gravel to expose the foundation piles of the weir, and the late Mr.W.G.Roberts brought this to the notice of the County Archaeologist. 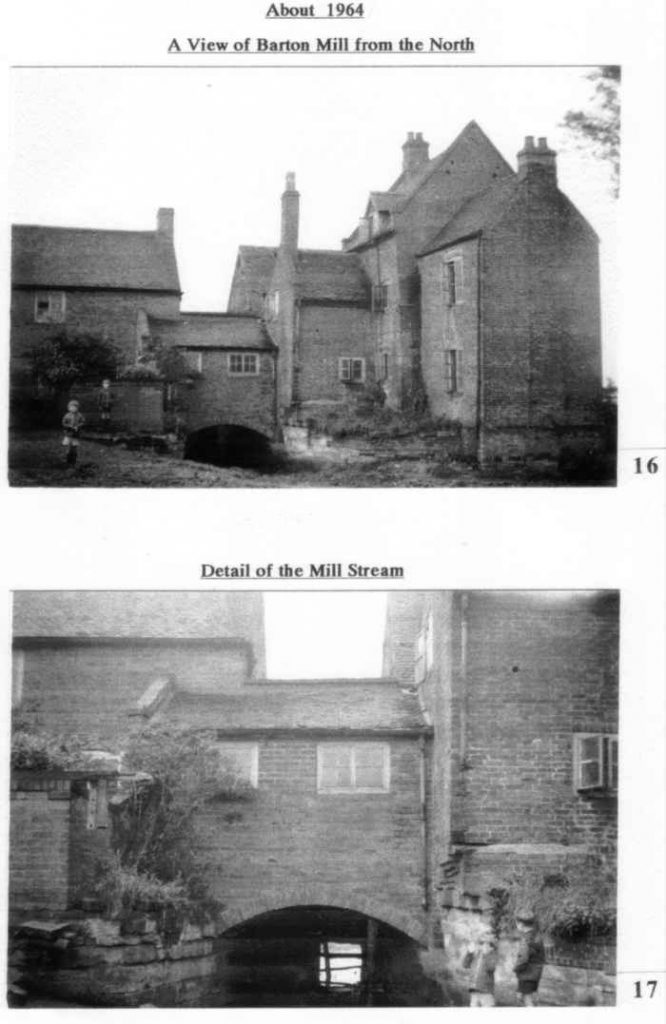 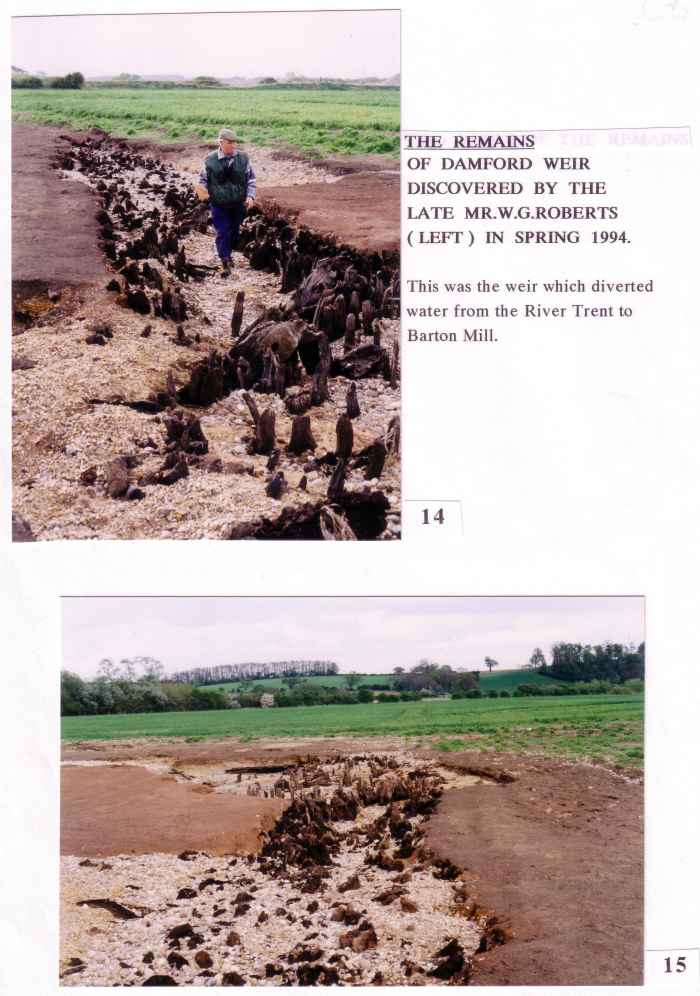 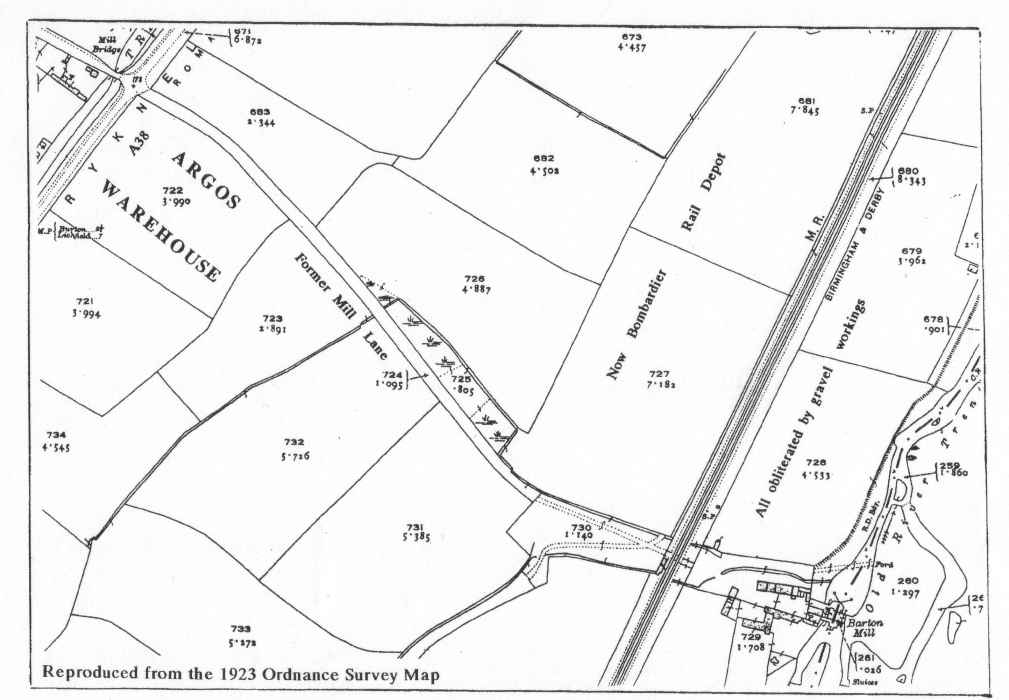 The poem about Barton Mill which follows clearly indicates that there was insufficient water to operate the machinery in 1910 and that this had probably been the case for many years earlier. For the next seventy years was allowed to deteriorate badly. Early in 1981 the late Mr.W.G.Roberts noticed that the demolition of the mill had begun. Before this work was too far advanced he had the presence of mind to do a complete survey of the building in order to record it for posterity. This survey was sent to Stafford for safe-keeping in the County Archives.

We’ve just come down from Lichfield to a pretty little farm –
I hope the change from Lichfield will never do us harm ;
The place we lived at Lichfield was named the Quarry Hill,
And now we live at Barton, at a farm called Barton Mill.

The house, a old and lofty one, which stands in counties two,
In Derbyshire and Staffordshire, with the water running through ;
The mill wheels they are ancient, but have done their duty well,
Having ground the wheat for a hundred years, which many a tale can tell.

The stream that now supplies it was the Trent in ancient days,
But modern times have altered things, and the Trent goes different ways ;
Plenty of fish, wild ducks, and swans are always to be seen ;
The meadows, rich and bountiful, are always growing green.

The house was old and rugged, the roof was falling too ;
Our landlord, very thoughtful, he came and looked it through ;
He said it must be papered and whitewashed all through,
And the garret stairs all taken down and new ones put there too.

And now the house is finished, and all is clean and right,
We work all day with pleasure, and rest in peace at night ;
Our cattle, too, are healthy, with good sheds to house them all,
With plenty in the rickyard to feed them at their call.

And this was in the year our good King Edward died,
Who ruled our mighty Empire, and for peace he always tried ;
His son, a gallant seaman, with long life may he be blessed
To rule us, as his Father did, until he goes to rest.

The main line of the Midland runs right across the farm,
But management it is so good they never do us harm ;
The porters at the crossing, both man and woman too,
They’re always ready at the gates, and with caution let us through.

May God send down His providence and help us from above,
For which we’ve toiled for sixty years, for a home of peace and love ;
And when our days our ended, and we’ve taken flight above,
May our children ever remember us with thoughts of praise and love.

1910. JOHN SHELLEY.
This is a copy of a charming poem which was found amongst the archives at Catton Hall and it was kindly lent by the late Mr.D.Neilson in the hope that it would be more widely read.

Prior to 1991 the eastern boundary of the Civil Parish of Barton followed the River Trent southwards past Walton until it reached Grid Reference 205172. It then followed the course of the Old River Trent, now extinct. This route also formed the East Staffordshire Borough Council and County Council boundaries, in addition to that of the Ecclesiastical Parish of Barton and the Parliamentary Constituency.

On the 1st.April, 1991, the Secretary of State made an Order under the 1972 Local Government Act changing the local government boundaries between Barton under Needwood and Walton upon Trent. The present Civil Parish boundary runs past Walton, as before, but now continues further south along the River Trent to Grid Reference 204161 by the site of the former Damford Weir. The local government and parliamentary boundaries follow the same route to this point. The Barton Civil Parish boundary leaves their company here and follows the Old River Trent for a short distance before heading westwards towards Catholme and Dogshead Lane. The whole of the area of Borough Holme is now in Barton under Needwood Civil Parish.

However, it is a different matter with the Ecclesiastical Parish boundary. The Lichfield Diocesan Archivist has established that this boundary still follows the Old River Trent. The consequence of this is that Borough Holme is in Walton for ecclesiastical purposes, and in Barton for civil matters. 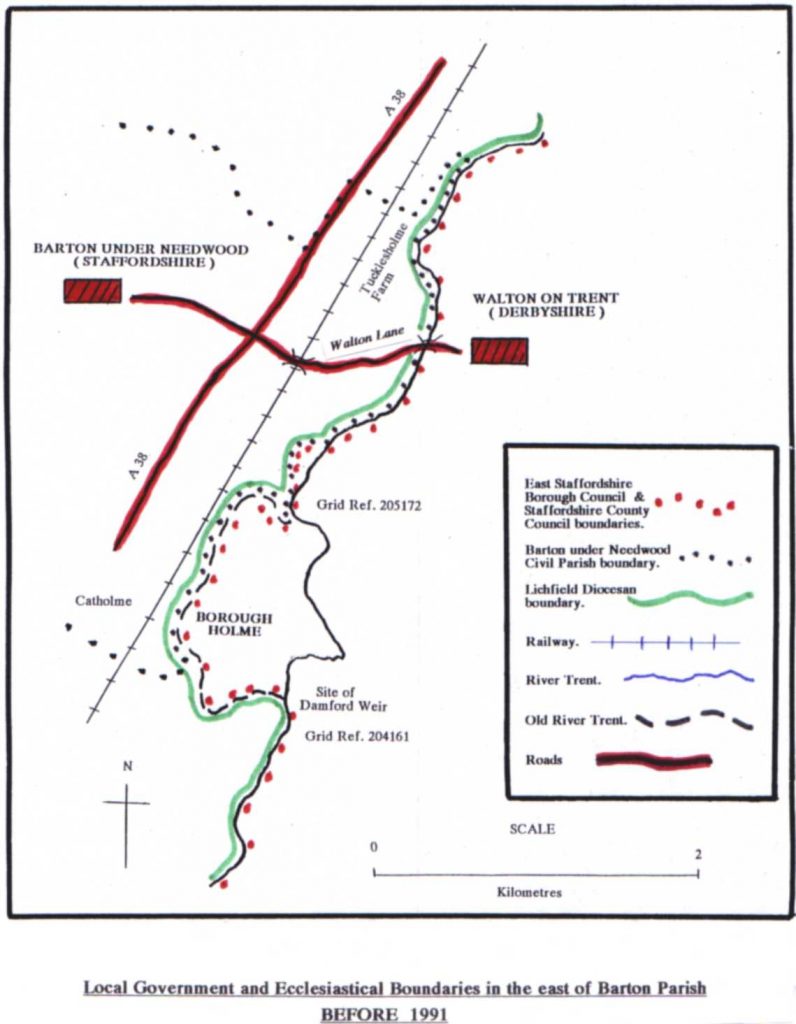 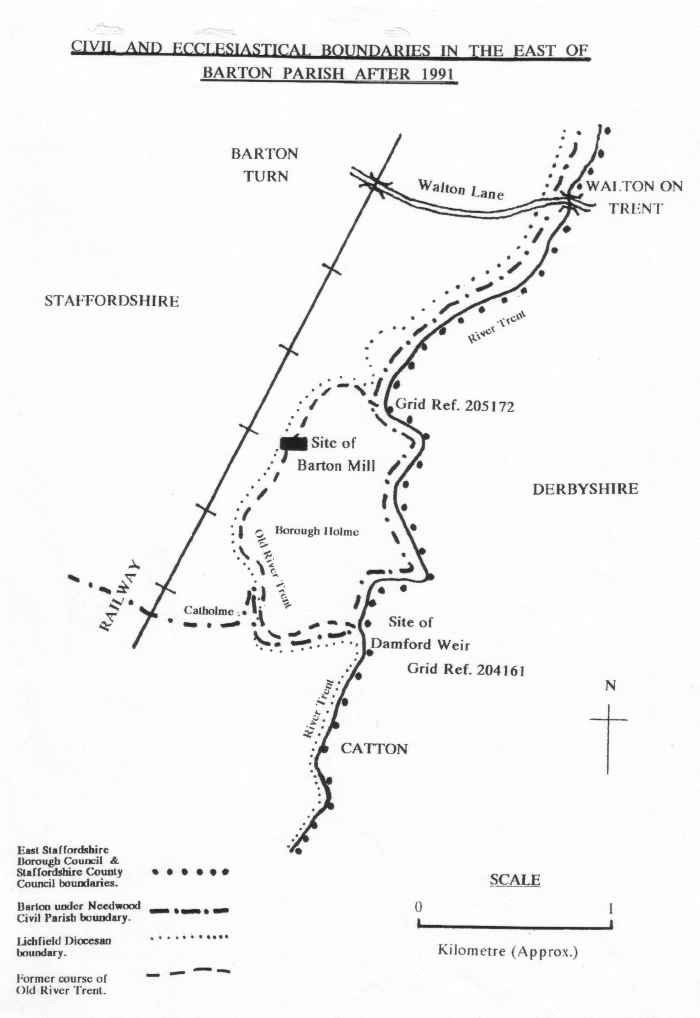 These things serve to show how important the Trent was, and to some extent still is, as a natural barrier. There was no bridge until 1835, and the present bridge restricts the passage of large, wide and heavy vehicles.

There are other boundary discrepencies unrelated to rivers. The Ecclesiastical Parish of Barton has juridiction over parts of other civil parishes. On its north side it includes a small part of Dunstall. On its south side it includes three small parts of Wychnor and on its western side it has two small parts of Yoxall. There is also a portion of the Civil Parish of Barton in the north-west which lies in Hoar Cross with Newchurch Ecclesiastical Parish !