The Trent Valley provided a natural routeway for migrating peoples, traders and invading armies. The Iron Age fort at Borough Hill on the Walton side of the valley bears this out. It was occupied by the Celtic ” Coritani ” tribe and they had a superb vantage point for observing the movement of hostile armies. The concrete ” pill boxes ” of the Second World War were built to counter the anticipated invasion of Britain by German Panzer Divisions in 1940. Two examples can be seen near Walton Bridge on the west bank of the Trent, either side of Walton Lane. 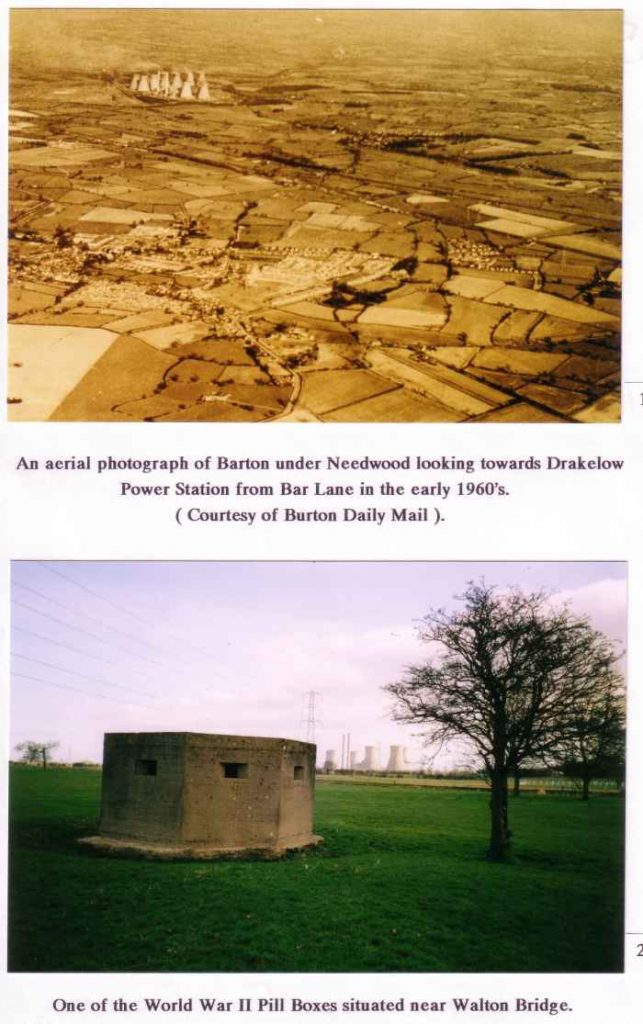 A Middle Bronze Age settlement of 1,500 B.C. was excavated near Tucklesholm Farm, north-east of Barton Turn in 1996 by Dr.Anthony Martin of the archaeological firm Gifford and Partners. It was a rescue excavation prior to the development of Barton Turn business park, ( Rylance/Graycar ). A cremation burial site was discovered and three of the burials were in urns. The burial urns were sent to experts at Bradford University for examination. They were able to use specialised scanning equipment housed at Airedale General Hospital. The urns can now be seen in Stoke Museum.

The Romans built a military road, Ryknield, (Rykneld or Ryknild) Street along the middle of the valley, possibly following a much earlier routeway, and aerial photos showed evidence of some Roman settlement just south of Catholme Lane.

On the north side of Catholme lane, just east of the railway line, there was a large Saxon settlement and this was excavated by a team from Nottingham University under Dr.Roscoe Bradley. It seems likely that the site might have been abandoned because of the risk of flooding. Both sites have since been destroyed by gravel extraction.

Viking invaders moved up the valley, leaving us with place names like Catholme, Borough Holme, Fatholme and Tucklesholme.

Barton under Needwood, a Saxon settlement itself, lay in an important part of the Kingdom of Mercia, with King Offa holding court at both Repton and Tamworth. The village is mentioned in the Domesday Book. It probably started as a linear village, running either side of the present Main Street, and it lies at the edge of the Trent Valley at about 62m. above sea level, thus avoiding floodwaters from the river on its eastern side and keeping clear of Needwood Forest to the west.

The precise location of the village is determined by the point at which the dry route running along the western side of the Trent valley is joined by the only cross-valley route running from the ford at Walton. It seems natural that the church was built near to the junction of these routes. Of course, we do not know the site of the first church, but it seems likely to have been on the site of the present building. The existence of a church, or chapel of ease, is mentioned in a Visitation Roll of 1305 housed in the Lichfield Diocesan archives. The church is certainly the most important focal point of the village. 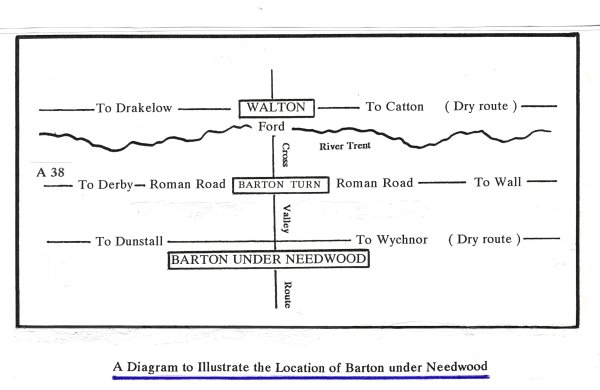 No important settlement grew up on the Roman Ryknield Street at Barton Turn because there was always the possibility of flooding. In the 1960’s and 1970’s the Trent often flooded as far as the railway line. The flooding would almost certainly have extended further west before the railway was built in 1839. In recent years there has been little extensive flooding because the river was dredged some years ago, and this enabled the water to move away faster.

Settlements with the greatest natural advantages tend to grow faster at the expense of others. As their populations increased, so did their demand for food from the surrounding areas. As Barton already started with more advantages than other local settlements, its further growth must have caused the others to decline, or disappear.

With increased mobility of the village population in the last hundred years, there came a decrease in its dependency on the local area. Over the past forty years the village has become a dormitory settlement and very few Barton residents earn a living in the Parish today. Its position in relation to the major road networks has given extra impetus to this. A further factor to be considered is the influence of information technology. It is no longer necessary for many people to live near their place of work.

Most of the older buildings of the village lie along Main Street, the western end of Station Road and a short part of Dunstall Road. The brick frontages are usually Georgian or Victorian, but these often hide much older half-timbered structures. The Staffordshire County Council designated these parts as a Conservation Area in 1967. This meant that special consideration would be given to any planning applications within this area, especially with regard to their visual impacts. 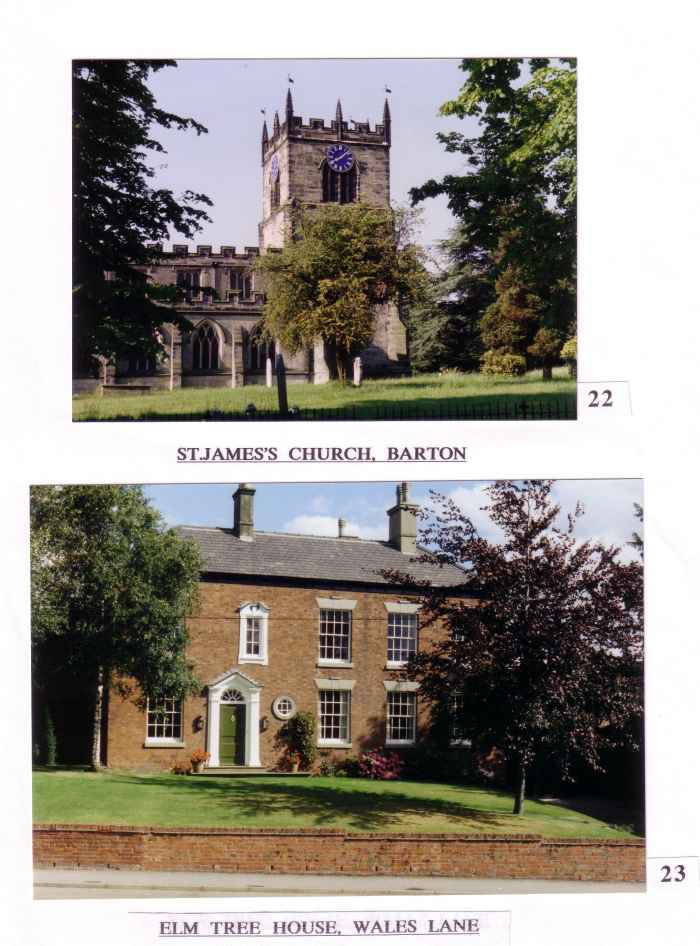 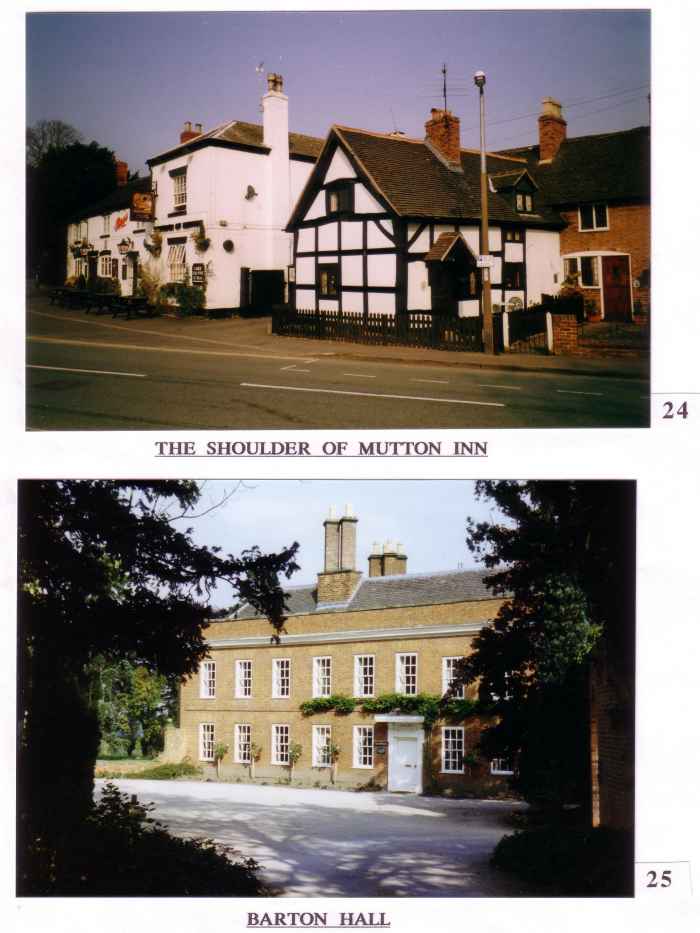 The County Council had hoped to follow this with an architectural survey of all the buildings in the conservation area, but it was never carried out. It would certainly have revealed some fascinating information. Unfortunately, many important buildings have been lost over the last forty years, such as the workhouse, the village constable’s accommodation and lock-up , and a fine row of half-timbered cottages, all in Wales Lane, together with Barton Mill, which stood at the end of that part of Mill Lane now occupied by Argos. All are examples of buildings lost, either through neglect, or having been pulled down in the name of ” progress “. A few very old buildings lie outside the Conservation Area and one of these, namely Wales Lane Farm, ( also known as Scarratt’s Farm ), dates from 1485, and it is currently being restored by its new owners. 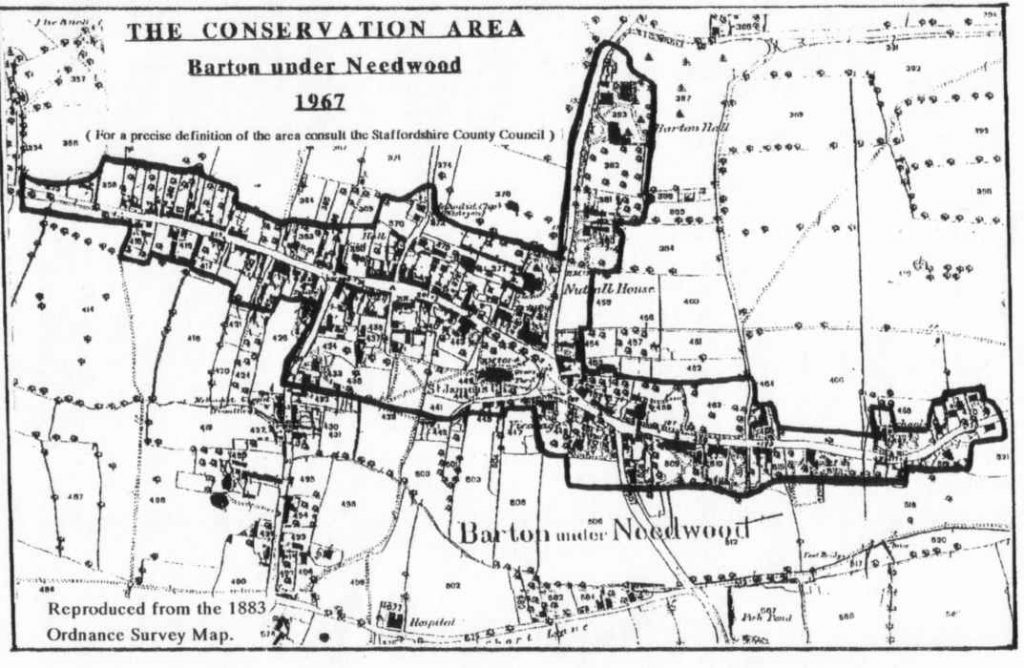 The expansion of Barton under Needwood since 1958 was inevitable to some extent, but the the rate of expansion was far too rapid for the existing services. A slower expansion rate would have allowed a gradual absorbtion of the new population into the existing social framework, thus enabling the village to retain some of its original character. 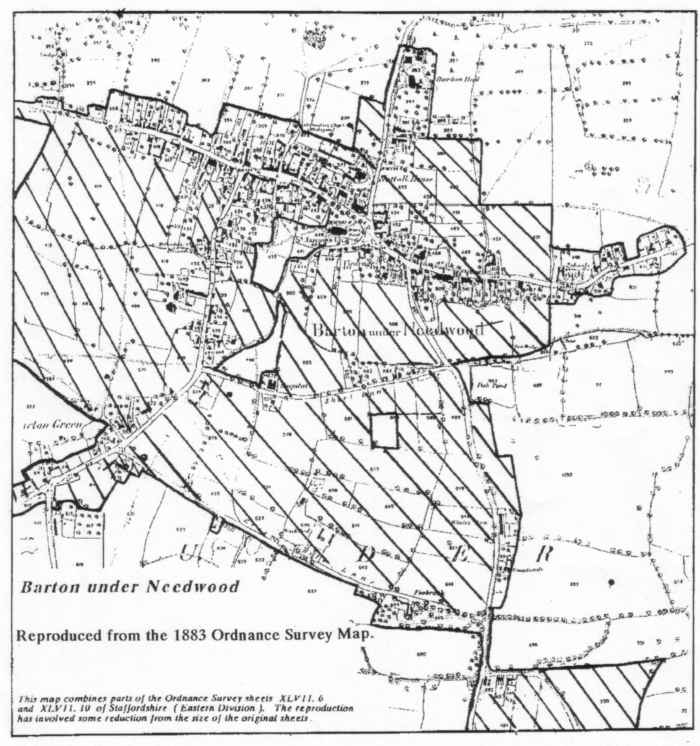 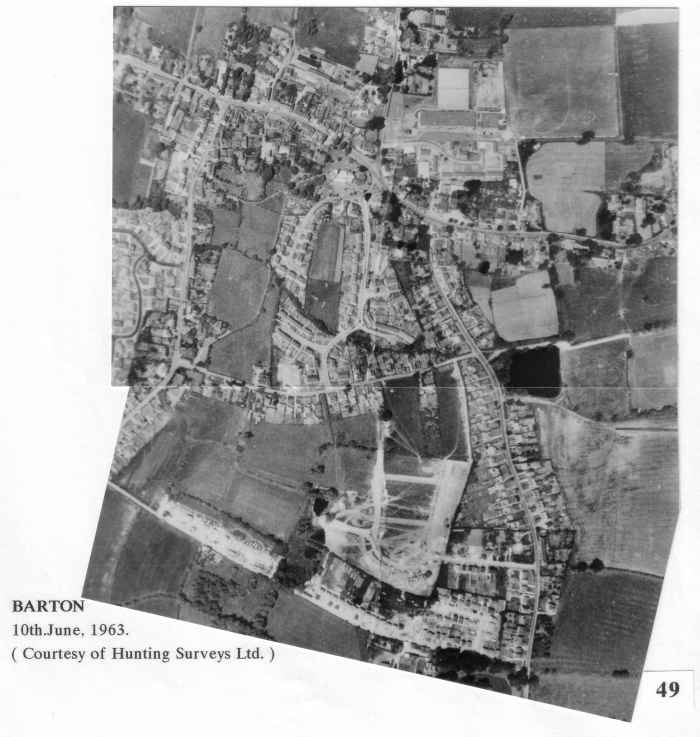 Whilst there will be ever increasing pressures for Barton to grow larger, it will be important for it to keep its essential identity and not allow itself to be merged into a conurbation, as seems likely to be the case with Fradley. It is vital that Barton retains its easy access to the open countryside.