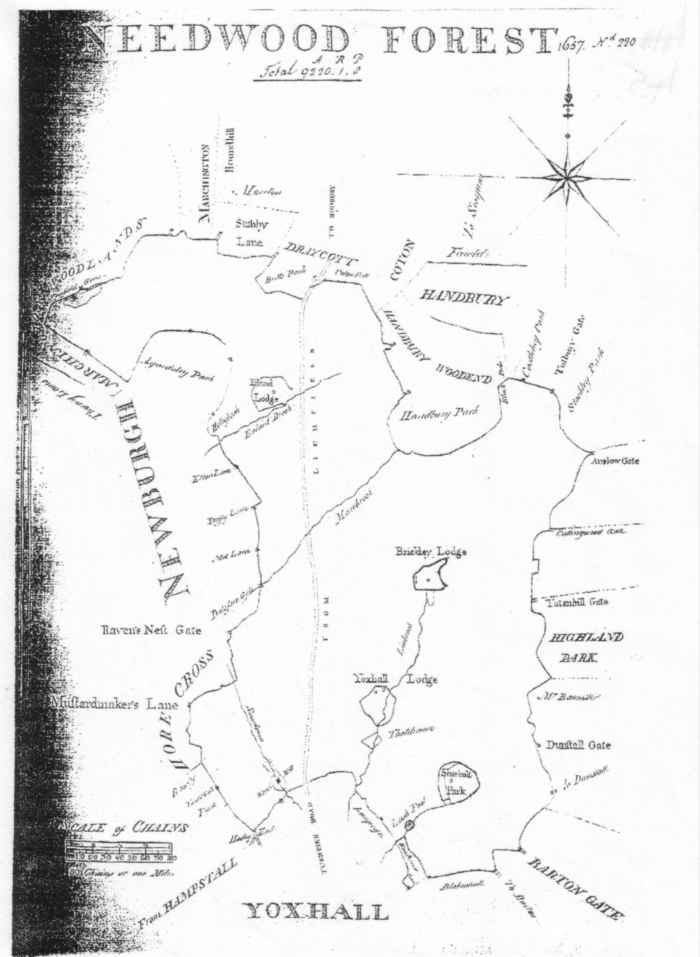 At one time the Royal Forest of Needwood probably came right down to the edge of the Trent valley. It was a Chase, or hunting ground, and by the 17th. century it covered 28,350 hectares ( 70,000 acres ), extending to Uttoxeter, Tutbury and Burton to the north and west. The forest boundary shown on the accompanying map shows the extent of the forest as it was in 1657 and it remained much the same right up to the final enclosure of the the forest in the early 19th. century. Between the two World Wars plantations of conifers were planted and the timber was used for pit-props. After 1945 the demand for wooden pit props ceased and they were replaced by steel props. At that time there were still some fragments of the original Needwood Forest in existence amounting to 4,455 hectares ( 11,000 acres ). Some pieces were in Bagots Park, but the greater part was on Duchy of Lancaster Land, mostly outside the Parish.

There were thirty two gates to the Forest of Needwood and three of these lay within the Parish. One was situated some about 150 yds. south-east of the road junction of Barton Gate. The second was situated on Bar Lane a short distance south of Yoxall Road. This was called Blakenhall Gate. The third was at Upper Blakenhall opposite Sich Lane. 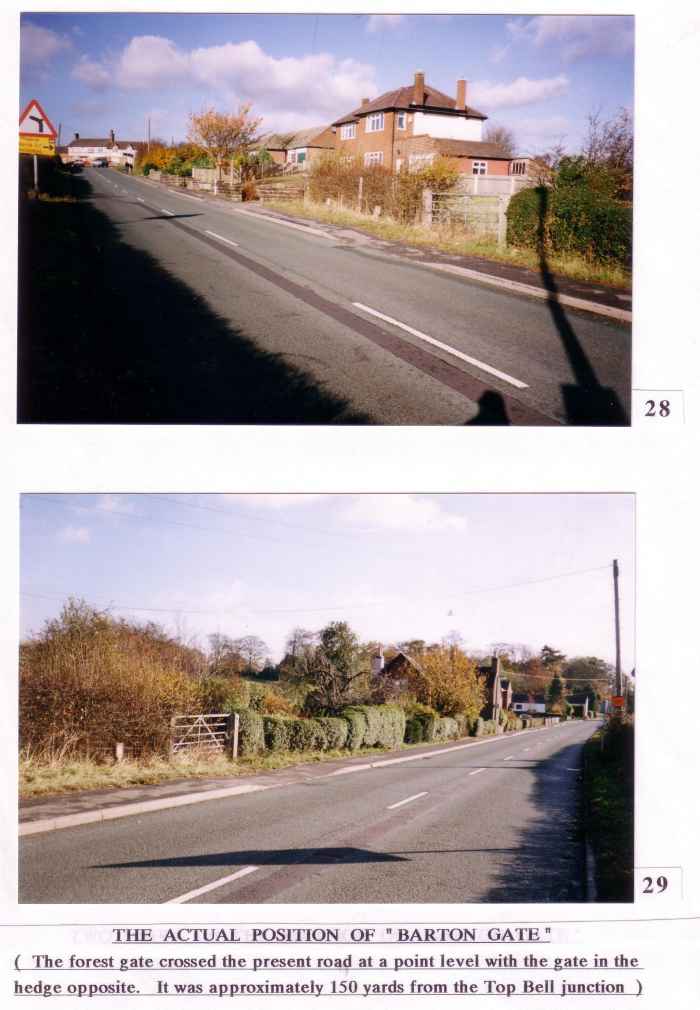 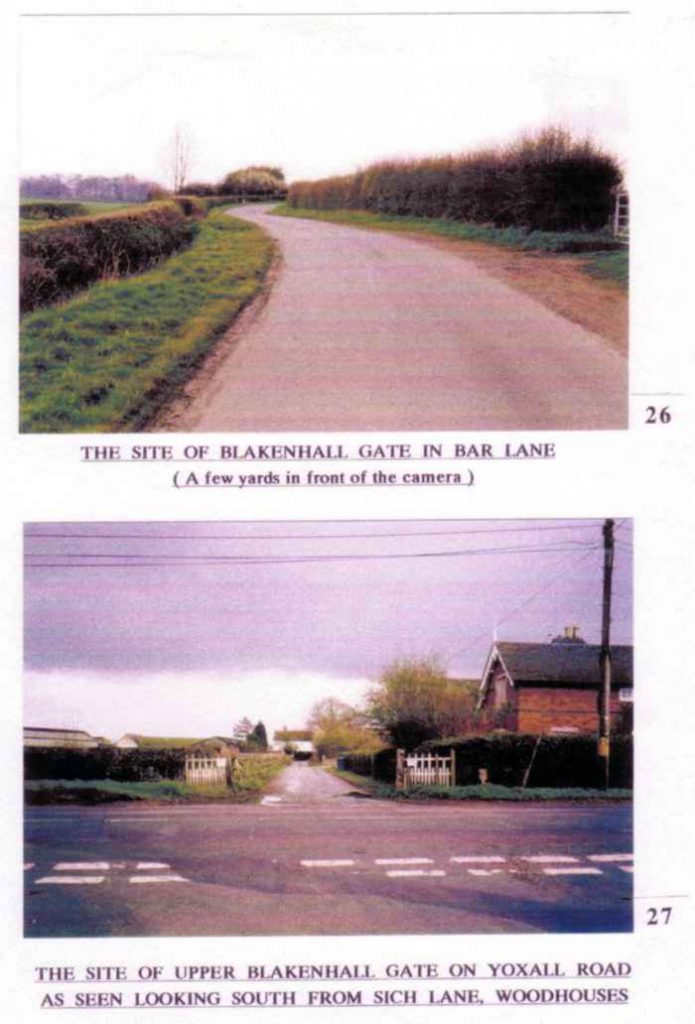 All these, and others, are shown on the accompanying map. They were not toll gates, but “Beast Gates”, or “Cattle Gates” to control movements of people and livestock. This is the view of the Solicitor to the Duchy of Lancaster at Lancaster Place in London. He says that the only tolls were those levied in later years on the turnpike road ( the present A 515 ) at Yoxall bridge and at Draycott in the Clay, i.e. at each end of the forest. It is interesting to note that nearly all the roads in the area of the former forest run in straight lines, similar to the tracks on Cannock Chase today. 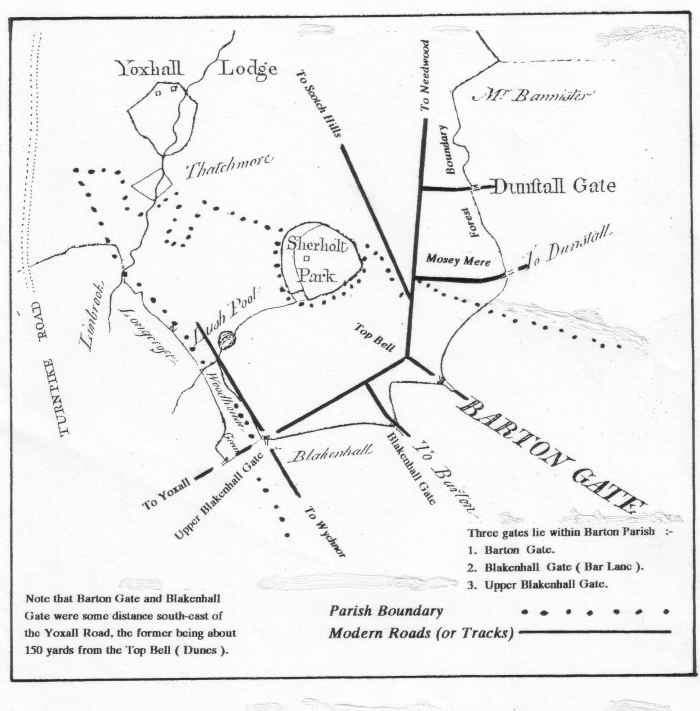 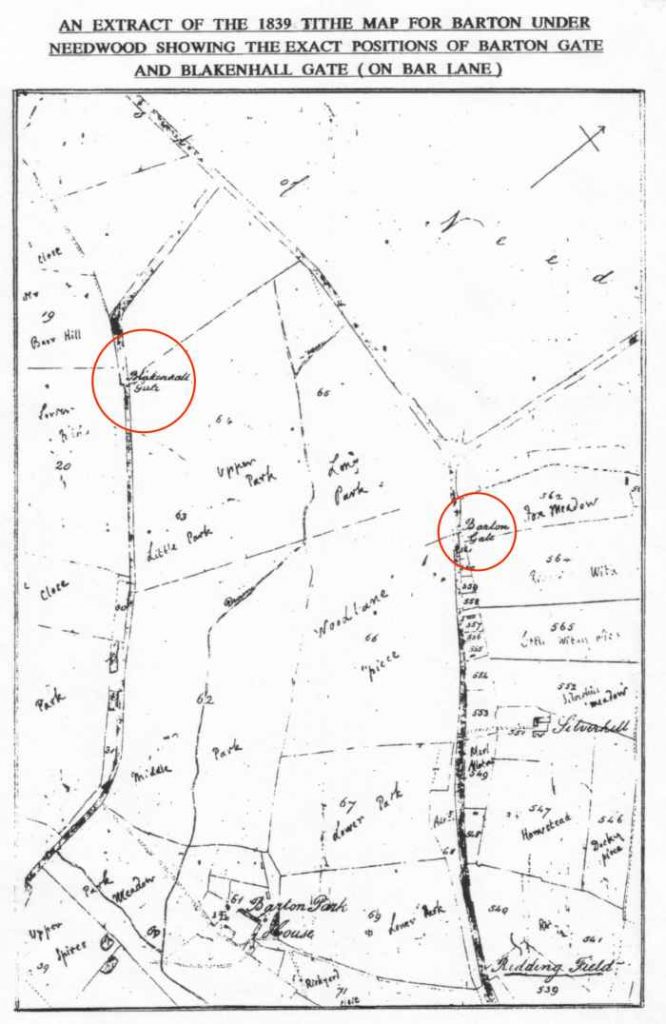 Duchy of Lancaster records show that in 1531 thirty three oak trees were brought to Barton from Highlands Park in Needwood Forest for building the church, which was finished in 1533, and in 1594 timber was was brought from the forest for building Thomas Russell’s school which opened in the following year.

An accompanying map shows the boundaries of the Manor of Barton ( as at 1609 ) and Needwood Forest ( as at 1657 ) and it will be seen that these boundaries overlap. The area of the ecclesiastical parish of Tatenhill prior to 1881 was similar to that of the Manor ( i.e. Barton, Dunstall and Tatenhill ) , but with the addition of Wychnor. The forest boundary remained much the same as it appears on this map until the enclosures of the early 1800’s. As the old ecclesiastical parish of Tatenhill extended into the forest, so it was that when Barton became an ecclesiastical Parish in its own right in 1881, its western part lay within the area of the former forest. 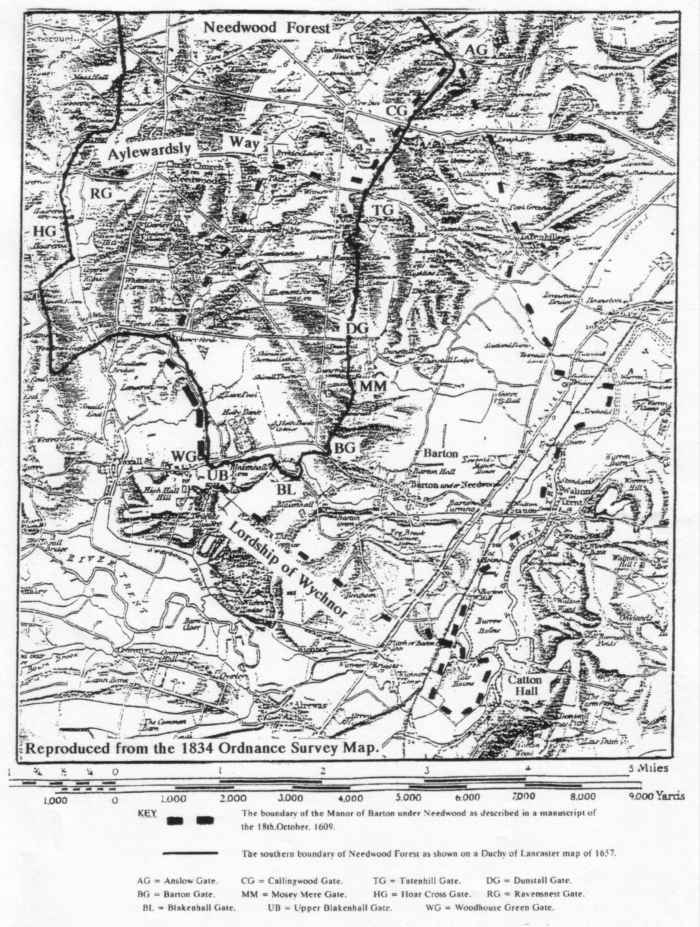 The following is the 1609 description of the bounds of Barton Manor
( Manuscript D3155/WH881, Catton Papers, Derby Records ).

” The Mannor of Barton aforesaid beginneth and boundeth upon the Lordshipp of Whichnor south and soe to the River Trent south east, halfe of which river belongeth to the said mannor, and is bounden with the said river to a place neare Redbrincke and from thence after the land belonging to Branston north eastward to Balkes brucke at the Gallowe Bridges and it is bounden with the same brucke to the land of the Lord Pagett nowe in the tenure of William Crosse northward, and soe it is bounden upon the Rowhey and from thence to the Lordshipp of Annsley towards the north till it come to the forest or chase of Needwood, and so the same is bounden with the ringe of the same forest to a place called Tatenhill Woodgate, at which gate Barton ward beginneth and it is bounded or knowne from Tutbury ward by the way leadinge from the same gate to Pagetts Bromley till it come to a brucke near Brickley Lodge, from where it is bounden or knowne from Yoxall ward by the same brucke till it come to a place called Stonyford, and from thence along after the boundes of the said ward of Yoxall to Blakenhall grounds and soe it doth extend after the outside thereof south west to Whichnor aforesaid “.

At the present time the whole of Needwood Forest has been incorporated into the National Forest which runs eastwards to Coalville in Leicestershire. Many landowners are taking advantage of grants to plant trees for the National Forest. Good examples of this can be seen on the Barton section of the Dunstall Estate near Smith Hills woods, parts of Barton Park Farm, and further east, near the Marina and the former gravel pits.