The Union of Arras of 1579 placed most of the southern Netherlands in the hands of the Spanish army under the Duke of Parma, whilst the Calvinist influence still prevailed in the north. The Dutch community in London decided to send Adrian to Ghent in 1580. Four years earlier the Calvinists there had been given the freedom to preach. It is almost certain that he went to Ghent to be a minister, but this is not stated explicitly. We do know that he played a full part in the community and that he had difficulty in his dealings with the more extreme Calvinist factions. Two years later he presided over the Synod of Flemish Churches meeting in Ghent, but in August that year the Duke of Parma’s army attacked Ghent. As a result of this, Adrian moved north to Leiden where he became a minister, apparently with a comfortable stipend. His wife, Catherine, had not been with him in Ghent, but it is probable that she joined him in Leiden.

Adrian Saravia had become increasingly convinced that only military intervention by England would solve the problems of the protestants in the Netherlands. The situation in England was that Sir William Cecil, ( now Lord Burghley , the Queen’s High Treasurer), wanted peace with Spain whilst the Earl of Leicester and Sir Francis Walsingham wanted to assist the protestants. In 1583, Adrian wrote to Sir Francis Walsingham, the Secretary of State, asking him to persuade Queen Elizabeth to send an army to the Netherlands, but Elizabeth refused to take any action.

A university had been founded in Leiden eight years earlier and on the 4th. August, 1584 Adrian was appointed Professor of Theology ( most probably in Hebrew and Old Testament studies). In February 1585 he became Rector of the University, and this appointment was actually extended for a further year. His son,Thomas, was a Philosophy student there.

In the meantime, things were moving fast elsewhere. Antwerp had fallen to the Spanish army,and King Philip of Spain had seized a large number of English ships, which virtually amounted to a declaration of war. In June, 1584 the Prince of Orange had been assassinated. Queen Elizabeth decided to act.

At the Treaty of Nonesuch of 1585, Elizabeth ordered the despatch of Lord Robert Dudley, Earl of Leicester, with a thousand cavalry and five thousand infantry forming the expeditionary force. Adrian wrote two letters in June, the first to Sir Francis Walsingham, asking that Elizabeth should assume sovereignty of the Netherlands, and the second to Lord Burghley, suggesting how this sovereignty might be achieved. He suggested that there should be joint garrisons of English and Dutch troops, and that the English should take hostages of the sons of prominent Dutch people until their authority was firmly established. In the event, Elizabeth appointed Leicester as a Governor to work with the Netherlands States General, not to assume sovereignty. Walsingham sent one of his agents to visit Adrian to ask him to help pave the way for the arrival of Leicester’s army.

The Earl of Leicester landed at Flushing on the 20th. December, 1585, and on the 4th. January, Adrian Saravia welcomed the Earl at The Hague on behalf of Leiden University in his offical capacity as Rector. Eight days later, the Earl paid a visit to Leiden University. It is thought that it was Leicester’s influence which brought about Adrian’s extra year as Rector. It is recorded that Adrian spent a great deal of time at Leicester’s headquarters at Utrecht, so much that the university authorities thought fit to remark about it.

Whilst Adrian was attending the National Synod of the Reform Church at The Hague in 1586, an extreme dissident section of the Calvinist Church in Utrecht gained the support of Leicester and dismissed the entire City Council, substituting their own supporters. Adrian had always been one for moderation where possible and he strongly disapproved of this action. However, the dismissed councillors, many of whom had been his friends, now accused him of siding with Leicester.

The Earl of Leicester returned to England early in 1587. Whilst he was away, some of the English commanders left behind acted treacherously against the Dutch cause and Adrian wrote to England requesting Leicester’s speedy return. It was a request that bore fruit because Leicester returned soon afterwards. 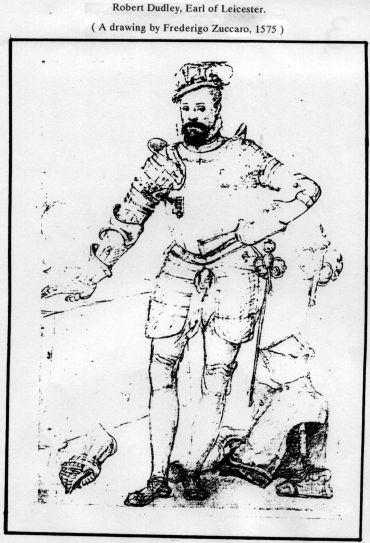 It would be interesting to know whether Adrian Saravia had some sort of premonition of what was to lie ahead, but he asked the university authorities if he could have leave to spend the winter in England. In the autumn of 1587, some people were allegedly plotting to ask Leicester to occupy Leiden and remove certain opponents of the church from the Town Council. The Council discovered the plot and arrested a number of people. Three were executed and the others were pardoned, but more people were placed on a wanted list. For some reason, probably because of spite or jealousy, Adrian was implicated and his name appeared on this list. He was summoned to face trial in December. His son, Thomas, gave him advanced warning of the danger he was in, so he did not present himself for trial. He travelled secretly to Alkmaar, where the Earl of Leicester was staying, and told him that he was completely innocent of the plot and furthermore he was not even in Leiden at the time.

When Adrian failed to present himself for trial, a warrant was issued for his arrest. He was relieved of his academic post and on the 13th.January 1588, in his absence, he was condemned to death and exiled. Escaping through The Hague, he sailed for England leaving considerable debts behind him, never to return.