Railways had existed long before the development of the locomotive. They took the form of man-hauled, or horse-drawn, tramways and plateways. Their purpose was to convey minerals to canals, rivers or to the coast.

Although George Stephenson ( 1781-1848 ) did not produce the first locomotive, his experience at Killingworth Colliery enabled him to make one of the earliest successful ones. His locomotives were chosen for the new railway which had been built between Manchester and Liverpool. A little later, when business men in the Midlands were considering building a railway from Derby to Birmingham, it was natural for them to choose George Stephenson to survey the route. This he did in 1835 and the Birmingham and Derby Junction Railway Bill passed through Parliament on the 30th.March,1836, receiving the Royal Assent on the 19th.May, 1836. By September of that year, George had been appointed as the Chief Engineer of the Company. His survey revealed that, for the most part, the route was fairly straight and level, but that it would require a cutting on the approach to Derby together with a total of seventy eight bridges and two viaducts. 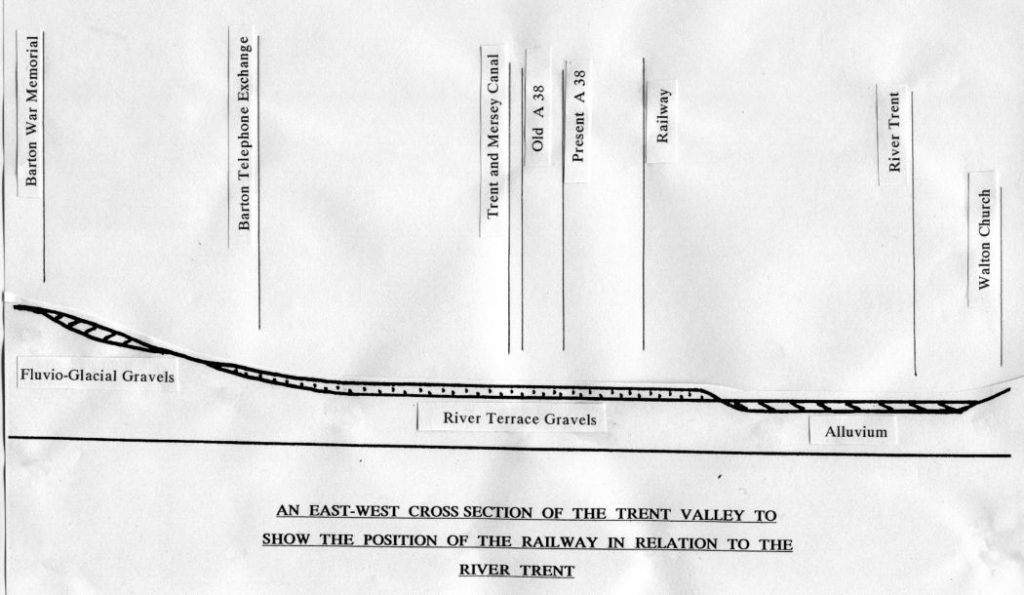 Owing to pressure of work on other new railway lines, George asked the Board if his son, Robert ( 1803-1859 ), could take over the post of Engineer in his place and this was agreed to Robert, in his turn, appointed John Birkenshaw as his assistant in June,1839.The course which had been selected for the railway, as it passed through the present parish of Barton under Needwood, was chosen with great care. It ran roughly parallel with the Turnpike Road (now the A 38) and a few feet above the flood plain of the River Trent. Until quite recently, when the Trent was dredged, the river used to flood regularly almost as far as the railway line.

From 1836 onwards, work was in progress along the whole length of the forty one miles of trackbed from Derby to Hampton. At Hampton, the route would follow the existing London and Birmingham Railway line to its terminus at Curzon Street in Birmingham. The Barton under Needwood Tithe Map of 1839 shows how the railway carved its way through the parish, often splitting existing fields in two. From 1836 to 1839, during the railway construction, Barton would have experienced another influx of migrant workers in much the same way as they had done some fifty years earlier.  It is not known whether the road bridge carrying Station Road/Walton Lane over the railway was built when the line opened. Few of the minor stations were ready at this time, and it was not until October,1840, that the contract for Barton and Walton Station was given to a Thomas Jackson for an agreed price of £288.

The track was sufficiently ready for a test run on the 29th.May,1839 when Robert Stephenson took the locomotive ‘DERBY’ from Birmingham to Derby and back declaring that, in his opinion, everything was in order. Two days later a Board of Trade Inspector was due to visit the new line and pass judgement. He must have approved of what he saw because the ‘Official’ first train left Curzon Street Station at 10.20 a.m. on the 5th.August,1839, carrying the Board of Directors.  It was hauled by the locomotive ‘TAMWORTH’. The train arrived at Derby at 1.10 p.m. where the party was entertained with refreshments at a local hotel before returning to the station for the 4.00 p.m. departure for Birmingham. The public opening occurred on the 12th August,1839, and the accompanying timetable shows the frequency of train services and the level of fares operating from that date. 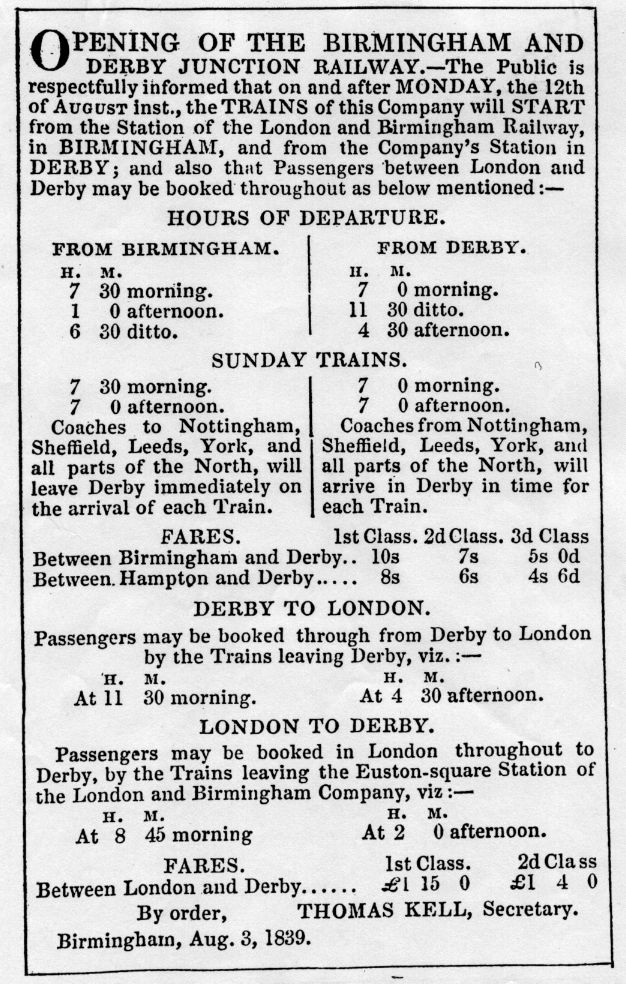 From the very start of the operational working there were problems connected with the length of the track between Hampton and the Curzon Street terminus which was shared with the London and Birmingham Railway. On the 4th.June, 1840, an Act of Parliament was passed enabling the construction of an  independent line through Castle Bromwich to a new terminus at Lawley Street, Birmingham. In the next few years competition was very fierce both from other railway companies and from canals, and efforts were made to increase freight traffic, ( e.g.carrying  Burton Beer ), and to encourage excursions. 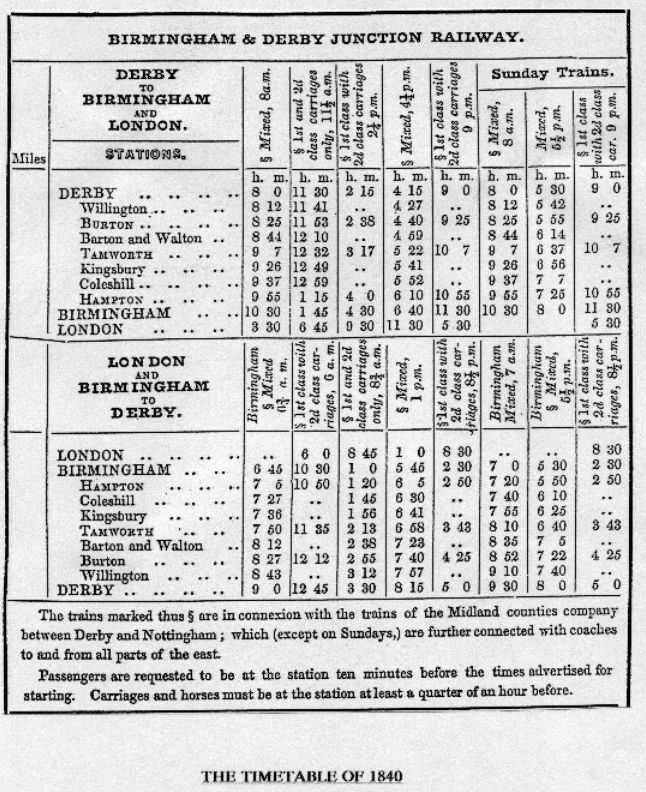 The Company had twelve passenger locomotives, all of them being 2-2-2’s. According to the librarian at the National Railway Museum in York, no drawings of these locomotives have survived, but it would be fair to assume that they were similar to other Stephenson locomotives of the period. They were named after rivers, or places, associated with the railway. Their names were :-

The locomotive BARTON was built by Mather,Dixon of Liverpool. 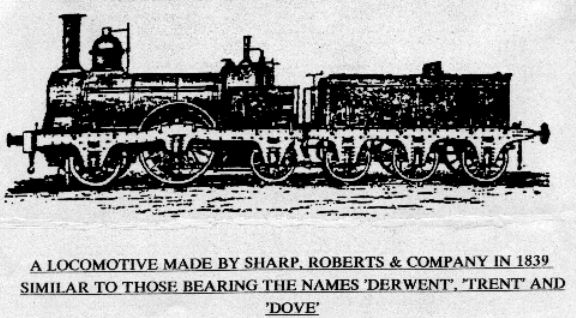 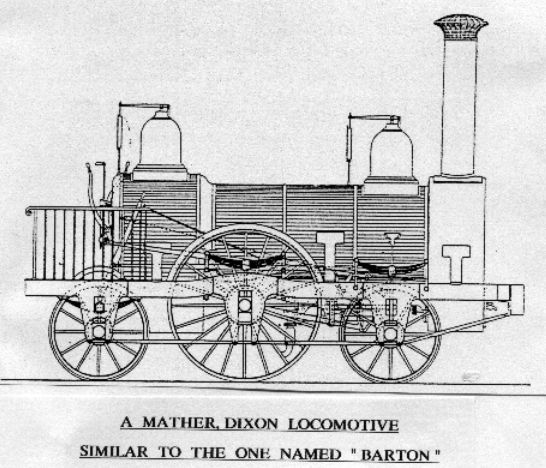 The trains must have been very colourful because the First Class carriages were yellow, the Second Class blue, and the Third Class brown. 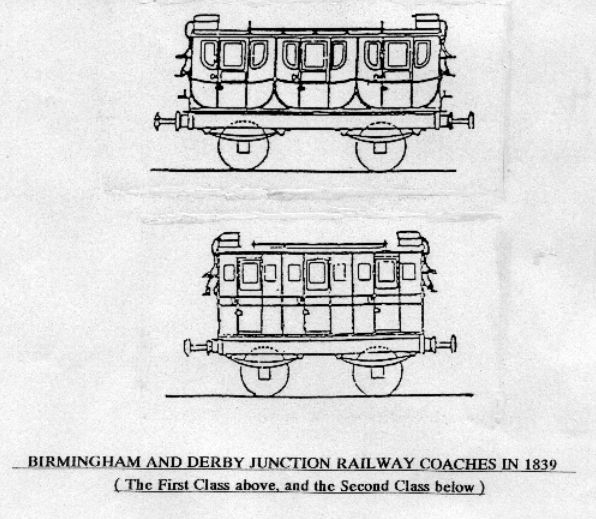 Stations were opened at the following locations :-

Until 1883, Burton Station was situated on the north side of the present road bridge, and in direct line with Station Street. Kingsbury Station was used by Sir Robert Peel, the Member of Parliament for Tamworth, whilst Barton & Walton and Burton Stations were used by King Edward VII, either as King, or Prince of Wales. 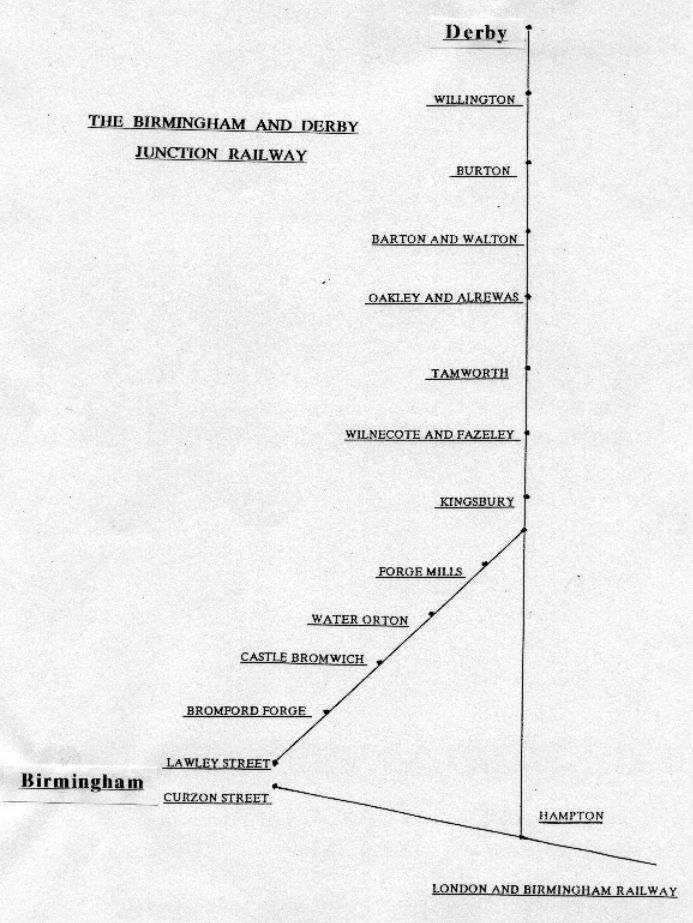 The Birmingham and Derby Junction Railway remained independent until the 10th.May,1844, when it combined with the North Midland and the Midland Counties railways to form the Midland Railway. Matthew Kirtley was appointed to the post of Locomotive Superintendant at an annual salary of £200, only to be exceeded by the salaries of the General Manager and the Secretary. In 1921 all the railways in the country were reduced to four groups and the Midland Railway was absorbed into the London, Midland and Scottish Railway (L.M.S.). Thus it remained until 1948 when railways were nationalised and named British Railways. At the present time the railway track and the stations are owned by ” Railtrack “, and the trains on this route are owned by Virgin Trains and Central Trains.