Apart from the usual village occupations such as farmers, blacksmiths, carpenters, joiners, cobblers, butchers, saddlers, bakers, builders, drapers, painters, brewers, wheelwrights, nailmakers, milliners, and dressmakers, some people in Barton were engaged in forestry. Others dug marl from local Marl pits. This was used for brick making, road making and as a top-dressing on the fields. Bricks were made locally in Captain’s Lane, Short Lane and almost certainly, in Brick Kiln Lane at Barton Gate. It seems likely that some bricks were actually made on site. The reddish-brown tint in the brickwork of older buildings is directly due to the colour of the Keuper Marl and this one reason why the older parts of Barton are so attractive. The boom in Barton brick making was in Georgian/Victorian times, continuing until bricks from other parts of the country could be delivered at a competitive price by canal or railway. 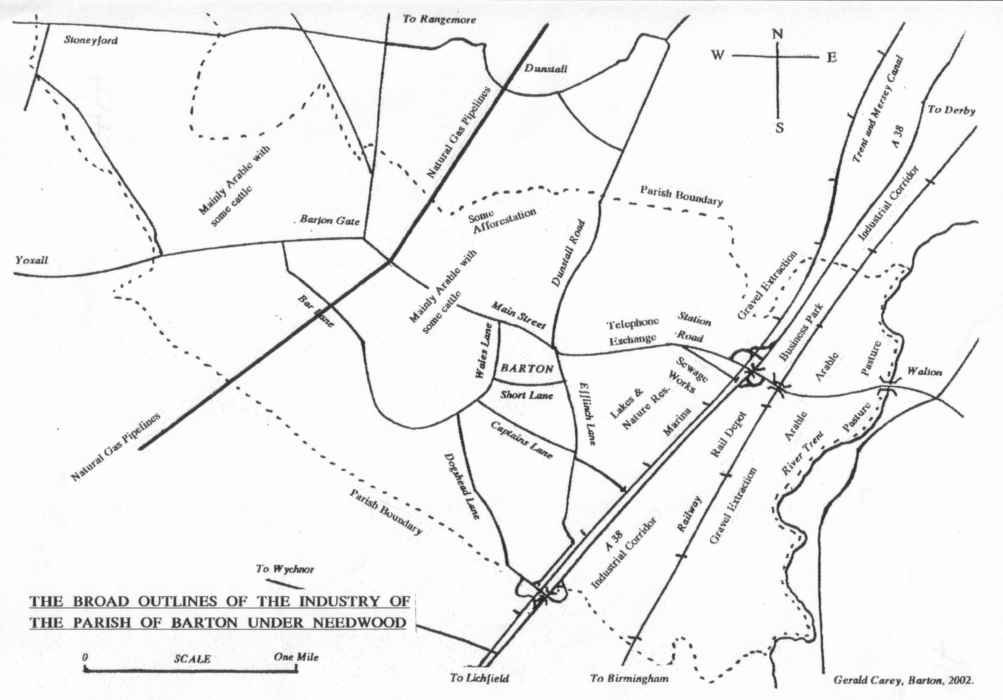 Barton Mill has been dealt with in some detail elsewhere. Of course the prime reason for the demise of the mill was the collapse of the Damford weir on the River Trent, which diverted water to the mill in its latter days. However, other reasons may have contributed to the neglect of the weir. It is possible that milling became so uneconomical with imports of cheaper wheat from America. It is also possible that unreliable water-powered mills could not compete with steam-powered mills elsewhere. In reality it would be a combination of factors.

Many people may be unaware that the principal natural gas pipelines in the national network, linking London with the north of Britain, run across the Parish just east of Barton Gate. Two pipes were laid, a 46cm. ( 18 inch ) diameter pipe in 1964 and a 61cm. ( 24 inch ) diameter pipe in 1966. They originally carried liquified methane gas which had been shipped to Britain from Algeria. Nowadays they carry North Sea gas.

Barton was used as a ” guinea pig ” in one of the first exercises in the conversion from coal gas to natural gas. A huge team of technicians converted all gas appliances in the village in a very short time.

Barton has its own Sewage Works near Barton Turn which has been enlarged several times with the expansion of the village.

One of the chief industrial developments of recent years has been the extensive gravel extraction from the First River Terrace Gravel. In the long term this might produce a pleasant landscape of lakes such as we now have between the marina and the village. To the north of Barton Turn is the Graycar Business Park which has a concentration of light industry in a number of separate units. The firms which operate here are concerned with the following activities :-

The leasing of dumper trucks.
The refurbishing of lorries and locomotives.
The fitting of hooks to the rear of refuse lorries,
The boring and grinding of engines.
The pressing of metal sheets and fabrication.
The making of wheel sets.
The sale of domestic and agricultural equipment.
The wholesale distribution of pharmaceutical goods.

To the south of Barton Turn is the Central Rivers Rail Maintenance Depot operated by Bombardier Transportation and this has been mentioned earlier. All this is part of Staffordshire County Council’s policy to have an industrial corridor in the Trent valley. Barton has no problem with this provided that there is no visual, noise or atmospheric pollution, and that the development fits in well with its environment. The gigantic warehouse built for Argos on the east side of the A 38 opposite Mill Lane is entirely inappropriate to a rural location and represents the worst kind of planning.

Service industries based on the use of information technology are on the increase. These include such examples as firms writing computer programs for other businesses and scientific laboratories, firms using computers as a source of data, such as financial advisers and insurance brokers, and firms engaged in the distribution of materials on a nationwide scale without actually handling those goods themselves. These firms often occupy existing domestic buildings. 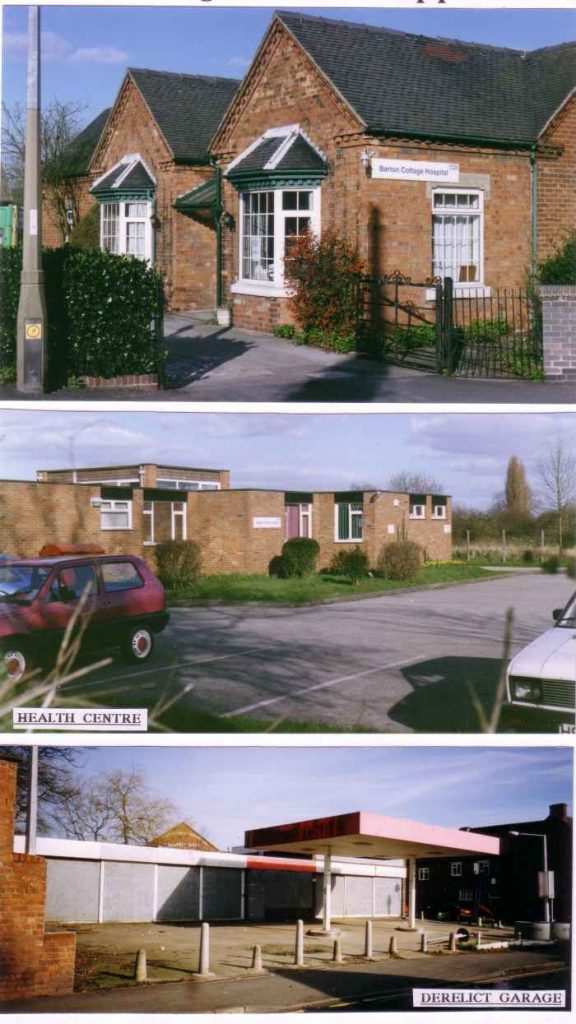