1.The Present Day Connection Between The John Taylor High School and Thomas Russell

Although he was a local man, Thomas Russell became a very wealthy merchant draper in the City of London in the sixteenth century. In his will of 1593, he left money for building a school in Barton and he entrusted Dr.Adrian Saravia, Rector of Tatenhill, to supervise this work. Barton came into the Parish of Tatenhill at that time. Thomas also left money, in the form of an annuity, for the salaries of the staff and the upkeep of the school, and he appointed the Drapers’ Guild, ( now the Drapers’ Company ), to administer this. This fact is important in the history of the company because Barton School was the first school they administered. The school was built on the site of the present infant school in Station Road, but the Tudor building was demolished in 1885. The Drapers’ Company continued to administer the school until 1876, when it was handed over to the Endowed Schools Commissioners.

Having spent many years researching the history of Thomas Russell and the school he founded, I was in a position to tell Barton under Needwood Parish Council that the 400th. Anniversary of his death occurred in 1993. I wrote a letter to Barton Parish Council in February, 1992, pointing this out in case they wished to commemorate the event. In my letter, I suggested that the Drapers’ Company should be approached with regard to having their coat of arms and a commemorative plaque placed on the wall of the Infant School, and I further suggested that members of the Drapers’ Company be invited to unveil it. Furthermore, I offered to draft a letter to this effect for the Parish Council to use, if they so wished. The Council accepted the offer and their letter to the Drapers’ Company of the 24th.March, 1992, followed the wording of my draft fairly closely.

The minutes of the Drapers’ Company state that a delegation was sent to Barton under Needwood in April, 1992 and that it ” received a very favourable impression of all three schools “, resulting in the Court’s resolution to re-establish ” historic links with the village and to mark the 400th.Anniversary of the death of Thomas Russell, Citizen and Draper “.

My suggestions were adopted, and so it was that, on the 16th.July, 1993, a party of Drapers consisting of The Master, five Wardens, three Clerks and the Beadle, visited Barton wearing full ceremonial robes.

Because it was Thomas Russell‘s intention to provide a free school for children of all ages, and as the Drapers considered that the John Taylor High School had taken over the mantle of responsibility for Barton’s older children, they visited all three schools that day.

The pleasing and unexpected outcome of this new association with The John Taylor High School is that the Drapers’ Company now awards an annual scholarship to the student with the best “A” Level examination results, as well as giving an annual bursary to the school to help students with the expenses of courses, or extra-mural activities. In addition to this, members of the Sixth Form visit Drapers’ Hall in London each year to consolidate the link.

Since this account was written, it has just been announced that the Drapers’ Company has donated £30,000 towards a Performing Arts Centre ( January 2000 ).

2. John Taylor, Master of the Rolls

John Taylor was the eldest of triplets born in Barton under Needwood in, or about, 1480. The story that has been passed down to us is that Henry VII saw the triplets whilst out hunting in Needwood Forest in 1485. As surviving triplets were such an unusual sight, he decided to educate them. John is thought to have attended a foreign university at some time but, in 1498 he was known to be studying at Oxford. He entered Royal Service in 1504, as a diplomat, but by 1509 he had been appointed Clerk to Parliament. As a Royal Chaplin, he had attended the funeral of Henry VII, and he acquired many ecclesiastical positions. He accompanied Henry VIII and Cardinal Wolsey on the continent, and he was present at the Field of the Cloth of Gold in 1520. He entertained ambassadors and acted as an ambassador himself in 1526. In the following year he assumed the important position of Master of the Rolls, only to be ousted by Thomas Cromwell, shortly before his death in 1534.

Remembering his place of birth, John Taylor built the present Parish Church in Barton. The building work started in 1513 and it was completed in 1533. At that time it was a Chapel of Ease in the Parish of Tatenhill, and it replaced a much older church.

In using his name for the school, we are honouring a very important person.

3. The opening of the new canteen

This is to inform you that as and from Monday of next week, December 6th,we shall be making use of the new canteen for school meals and consequently payment is to be made each day instead of once a week. If your child requires a school meal will you please ensure that he/she brings 12 pence each day.

4. The change to decimal currency

As you already know, we start using decimal money on Monday, 15th.February,1971 and school meals will be paid for in decimal coins from that day. To assist our accounting at school, it would be much appreciated if your child could bring to school the amount of money shown in Column 3 of the table below: 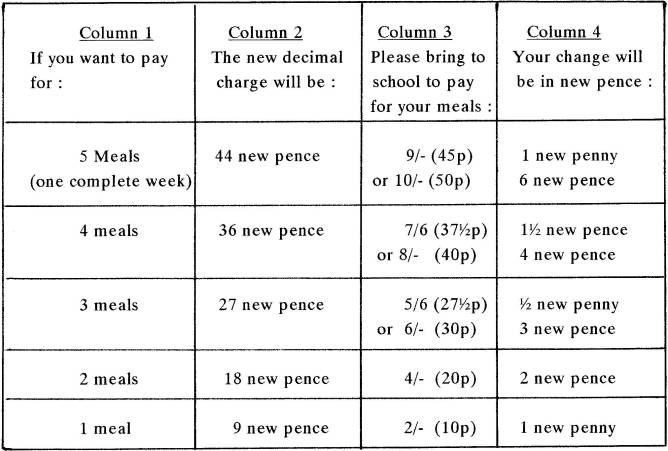 The amount in column 3 can be made up of any number of silver coins or old threepenny bits or old pennies. To simplify the change-over all credits for the week ending 12th.February, 1971will be rounded to pupils concerned on that day. We can then start the new decimal system on Monday, 15th.February, 1971.I hope that you will be able to co-operate with us in this matter.

8. References To Sources of Material

The writer’s personal collection of documents relating to the school.

The Minutes of the Drapers’ Company, London.

“A History of Thomas Russell, Draper of the City of London, and Barton School”. Gerald Carey.