It is a most interesting fact that in the small area covered by the Parish of Barton under Needwood there are five distinct types of rocks. I use the term ” rock ” in its geological sense of a deposit, which could be either soft or hard in nature.

If we look closely at the map of the geology of the Parish, we will find Alluvial deposits of the present flood plain of the River Trent extending almost as far as the railway line. There is also a narrow strip of Alluvium stretching west on each side of the Barton Brook. From this point, to the 54m. contour, we have the sands and gravels of the First River Terrace which represents an earlier flood plain created at a time when the Trent was very much larger than it is today. Proceeding further north-west we come across Fluvio-Glacial Gravels deposited when the melt-waters of the ice sheets occupied the whole of the width of the Trent valley at the end of the last Ice Age. Much of the village of Barton is situated on these deposits. Most of the rest of the Parish consists of Keuper Marl, a reddish/chocolate coloured deposit of the Triassic age. Patches of Boulder Clay can be found on top of the higher parts of the Keuper Marl. This is material which was deposited by the moving ice sheets. What an amazing variety we have on our doorstep !

Readers not already acquainted with Barton under Needwood may find the following Ordnance Survey and Geological Maps helpful. 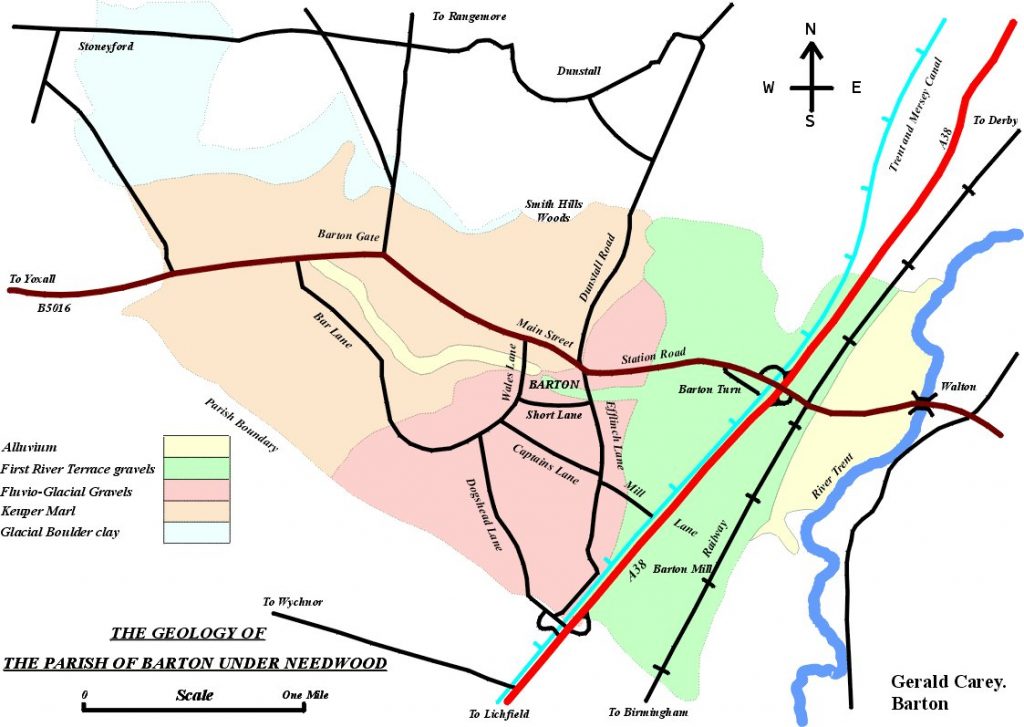 The Geology Of the Parish Of Barton Under Needwood

This rock was being formed during the Triassic Period ( 160-190 million years ago ). It is not really a marl in the true sense of the word. Real marls are calcareous. Keuper Marl is really a ” mudstone ” and it is only slightly calcareous. It consists of clay-minerals with a large proportion of desert-blown quartz dust and minute crystals of dolomite. In some places the marls contain beds of gypsum ( as at Fauld, near Tutbury ). The marls are usually red or chocolate in colour, but they sometimes have green blotches. The redness is produced by each component grain being covered by a thin film of iron oxide. This is supposed to be an indication of desert conditions at the time. Some of the deposits were wind blown and some were deposited in shallow seas where there was a high rate of evaporation owing to the great heat. These seas were fed by rivers originating in areas of wetter climate. The marl occurs in thicknesses varying from 198m. to 609m. ( 650 ft. to 2,000 ft ) and it represents material eroded from former mountains. 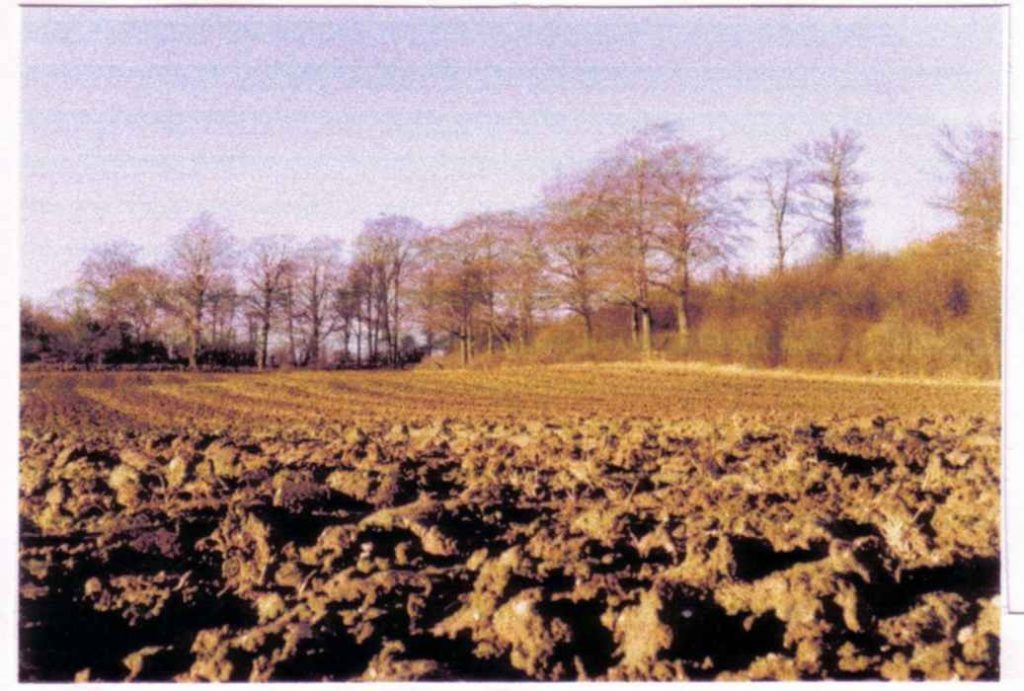 Keuper Marl is exposed in the higher parts of the Parish west of Dunstall Road, but it is covered by Boulder Clay to the west and north of Barton Gate, and by Fluvio-Glacial Gravels, First River Terrace Gravels and Alluvium in the middle of the valley.

There is an interesting exposure of Keuper Marl as you walk west from Upper Main Street towards Barton Gate. Shortly after passing the drive to Barton Park Farm you will see the garden of No.2 Barton Gate on the right hand side of the road. This is an old marl pit. Until recently, this rock was well exposed in a bank at the far side. However, a building has just been erected in the garden and this obscures much of the view, but a glimpse of the Marl can still be seen on the right hand side. 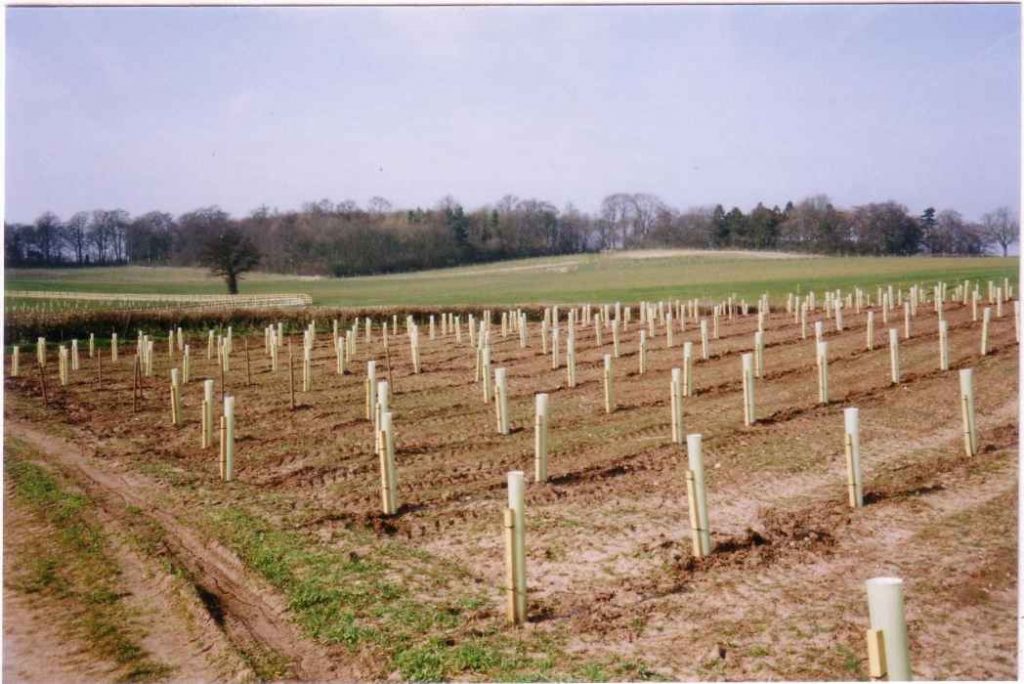 The term “recent” refers to the comparatively short geological period concerned with rocks laid down during the ice age, and subsequently up to the present day. 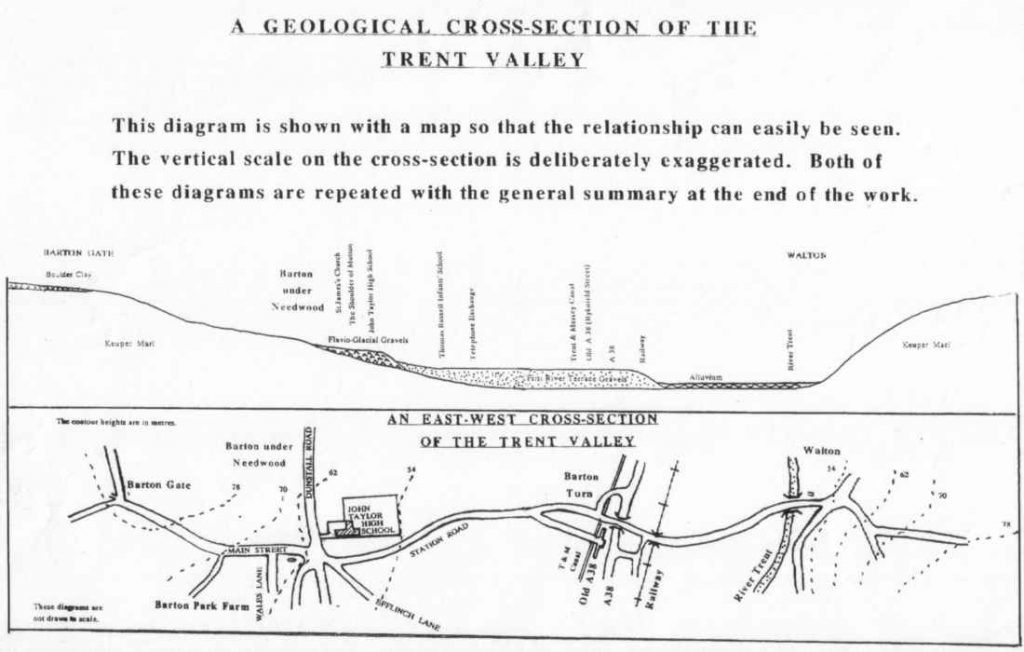 This is a tough grey clay containing stones and boulders of variable size and variable origin. In the case of Barton the word “Boulder” is misleading. No large rocks will be found here. Boulder Clay represents the residue of the grinding action of the ice sheets as they moved across base rocks. Its composition depends upon the nature of the ground over which the ice travelled. As has been stated, some of this can be found just west and north of Barton Gate.

These are sand and gravel deposits left by the melt-waters flowing from the thawing ice sheets towards the end of the fourth ( and last ) Ice Age, i.e. about 10,000 years ago. These deposits run from the telephone exchange in Station Road to Dunstall Road and underlie most of the John Taylor High School playing fields. A sharp drop in the level of the ground of about five feet can be seen at the eastern end of the playing fields. This is where these deposits meet the River Terrace. The steep cliff on the right of Dunstall Road as you move northwards out of the village is evidence of the power of the enormous river which was flowing at this time. You have to envisage a huge river covering the whole width of the valley.

A river terrace represents the level of a former flood plain of a river. A small rise in the level of the land in relation to the sea will cause a river to erode deeper into this old flood plain, thus forming a new flood plain at a lower level. The remains of the old flood plain become known as a terrace, and if this process is repeated several times there will be several terraces at different heights. The First River Terrace of the River Trent runs from a point just east of the bridge over the railway at Barton Turn to the Telephone Exchange on Station Road.

This is eroded rock material consisting mainly of sand, silt and gravel which a river has carried in suspension and which it is forced to deposit when its pace becomes slower. Alluvium is deposited on the beds of rivers and on the inside bends of meanders. It is also deposited on the whole flood plain in times of flood. This used to occur frequently between the River Trent and the railway line before the river was dredged. As mentioned earlier, Alluvium is found in the valley of Barton Brook, and between the railway line and the River Trent.